Green Remodeling in Korea: The Architecture of the Future (EN)

Many of the old, run-down buildings and houses in Korea consume too much energy. So, some of them are undergoing a "green remodeling" to improve their energy efficiency and the quality of the indoor environment. What does this architecture of the future look like?

About 70% of the 7.2 million existing buildings in Korea were built more than 15 years ago – and that percentage increases every year. These old energy-inefficient buildings are one reason Korea’s greenhouse gas emissions are still going up too.

So, the Korean Ministry of Land, Infrastructure and Transport has launched a green remodeling program to improve the energy efficiency of older buildings and the quality of their indoor environments. Remodeling takes much less time than putting up new buildings, and it also costs less. Green remodeling is an environmentally friendly construction method that takes nature into consideration. It also increases the value of the building, improves the quality of the indoor living and working environment and reduces energy consumption and greenhouse gas emissions. 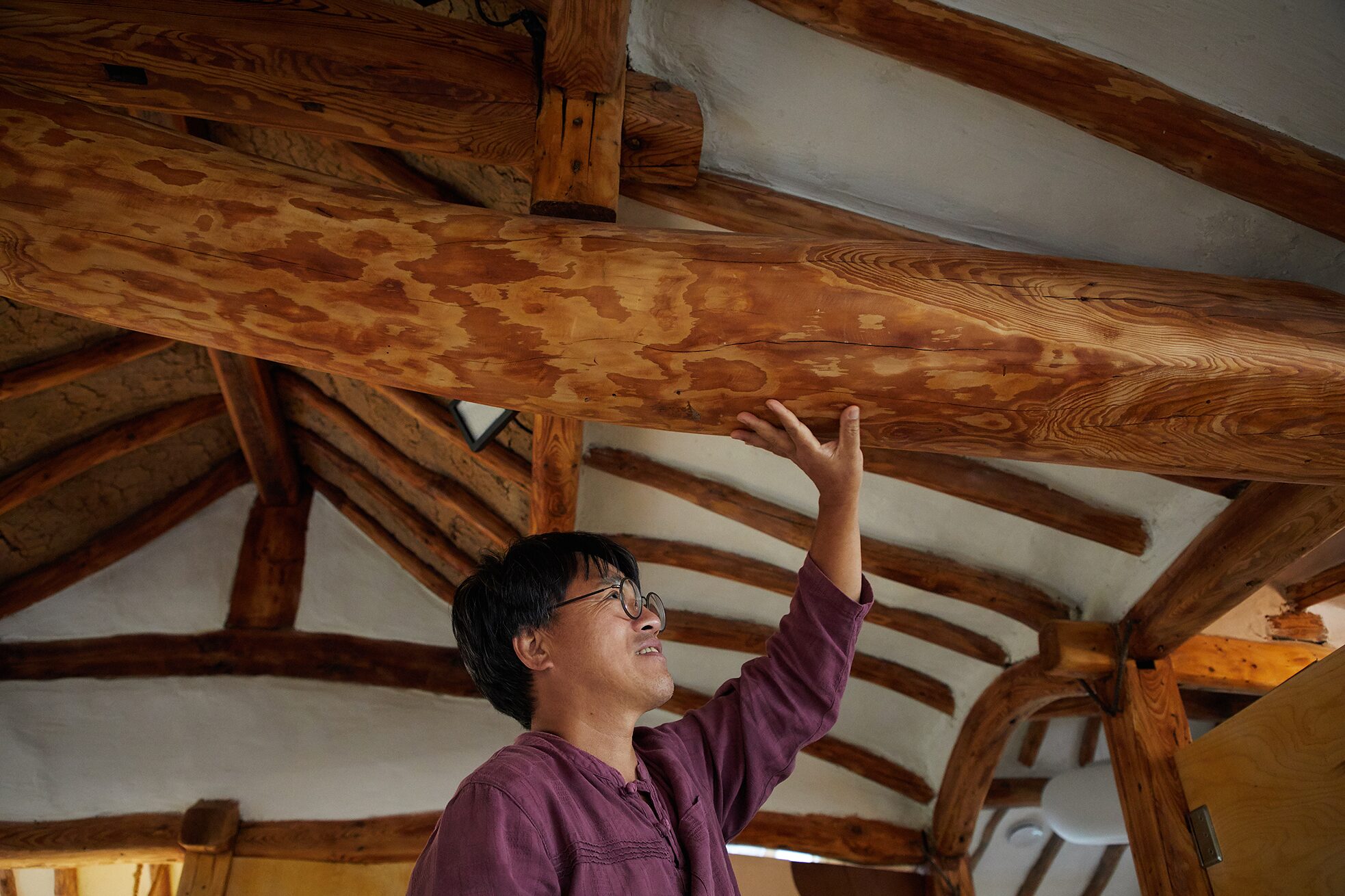 This retrofitted country home is located in Yangsa, a town in northern Ganghwa County, South Korea, just a few kilometers away from Gaepung County in North Korea. Between them lies Ganghwa Bay. On a clear day you can see the North Korean industrial region of Kaesong beyond the barbed wire fence. Byung Un Jung, the managing director of E-ECO Construction, a sustainable building company, had a very special house built for his mother, who’s from North Korea: from the rooftop, she can gaze longingly at her native country. He named it Friendly Duck House.

The Beauty of Hanoks 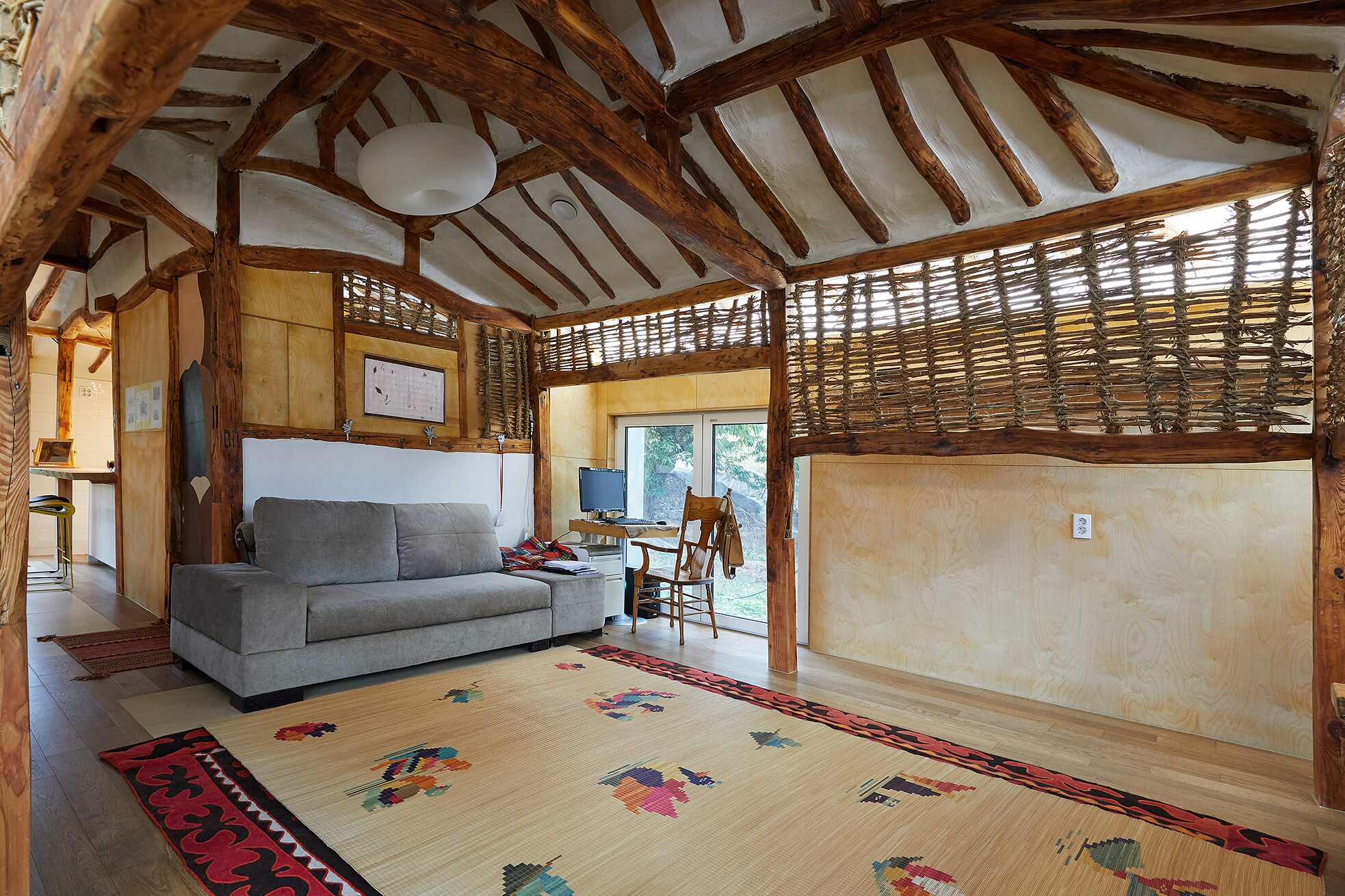 The traditional old house, or hanok, had been uninhabited for a long time and looked like a run-down hovel… until it was entirely redesigned 55 years later. Fascinated by its sturdy ridge-poles and curved rafters, Byung Un Jung thought long and hard about how to remodel the place in a way that would minimize energy loss whilst preserving the beauty of the old hanok. The result is his Friendly Duck House, which took first prize in the category “Residential Building” at the fifth Green Remodeling Best Practices Contest held by the Korean Ministry of Land, Infrastructure and Transport (MOLIT) and the Korea Land and Housing Corporation (LH). The contest is an architectural and cultural event that presents outstanding remodeling projects to the general public. 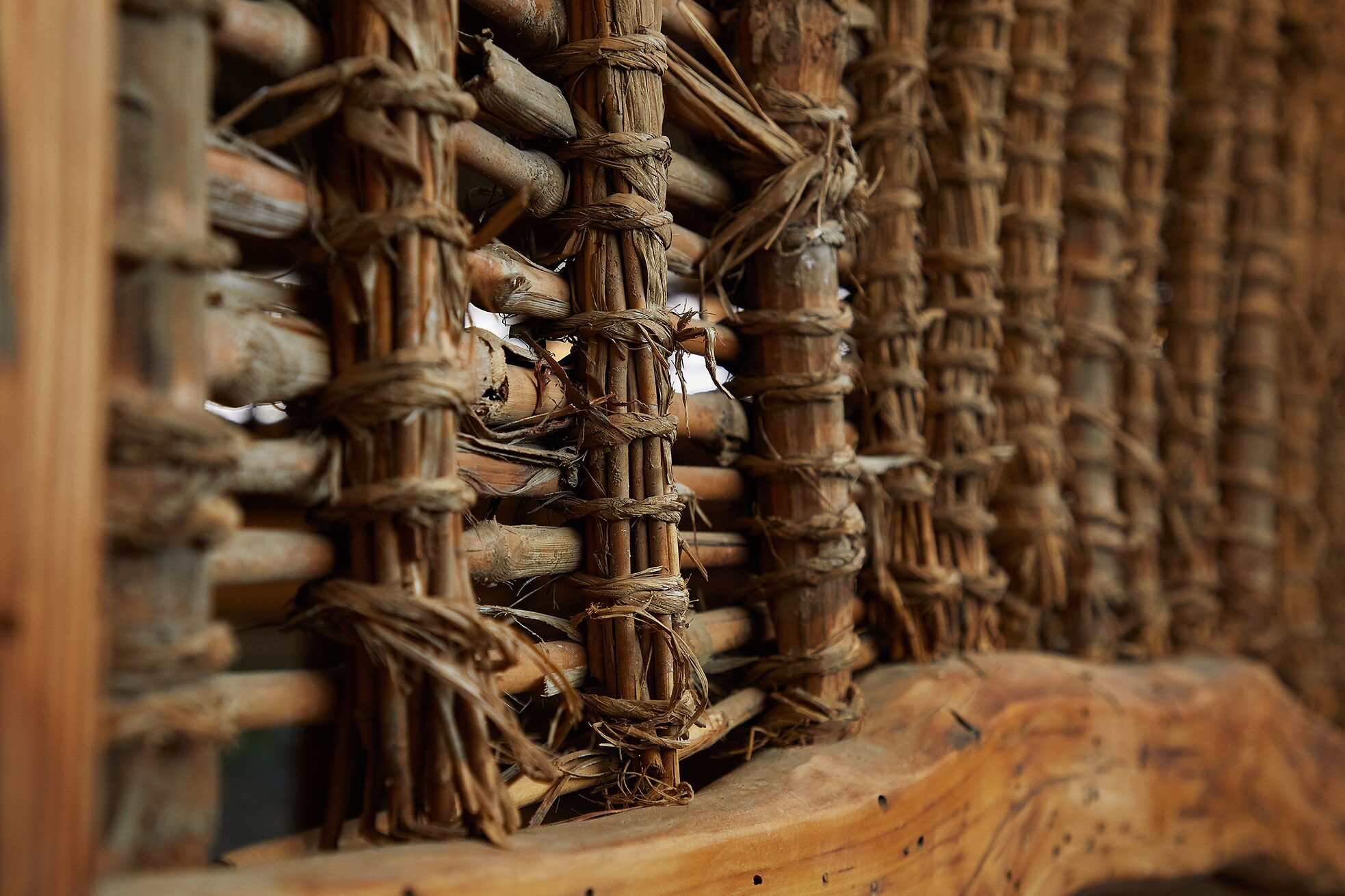 Byung Un Jung left the traditional structure of the old hanok, or Korean country home, unchanged, and only removed or repaired the columns that were in bad shape. And he preserved the beautiful features of the house, including the original rafters and ridge-poles, and had the ceiling coated with kaolin to bring out the lovely color of the wood. He also left some of the supporting elements he’d discovered in the loess walls standing. These supports are a mix of sorghum stalks and wood, and originally served as insulation to reduce energy loss. So the architects managed to preserve the old design and the original atmosphere of the house despite the remodeling. 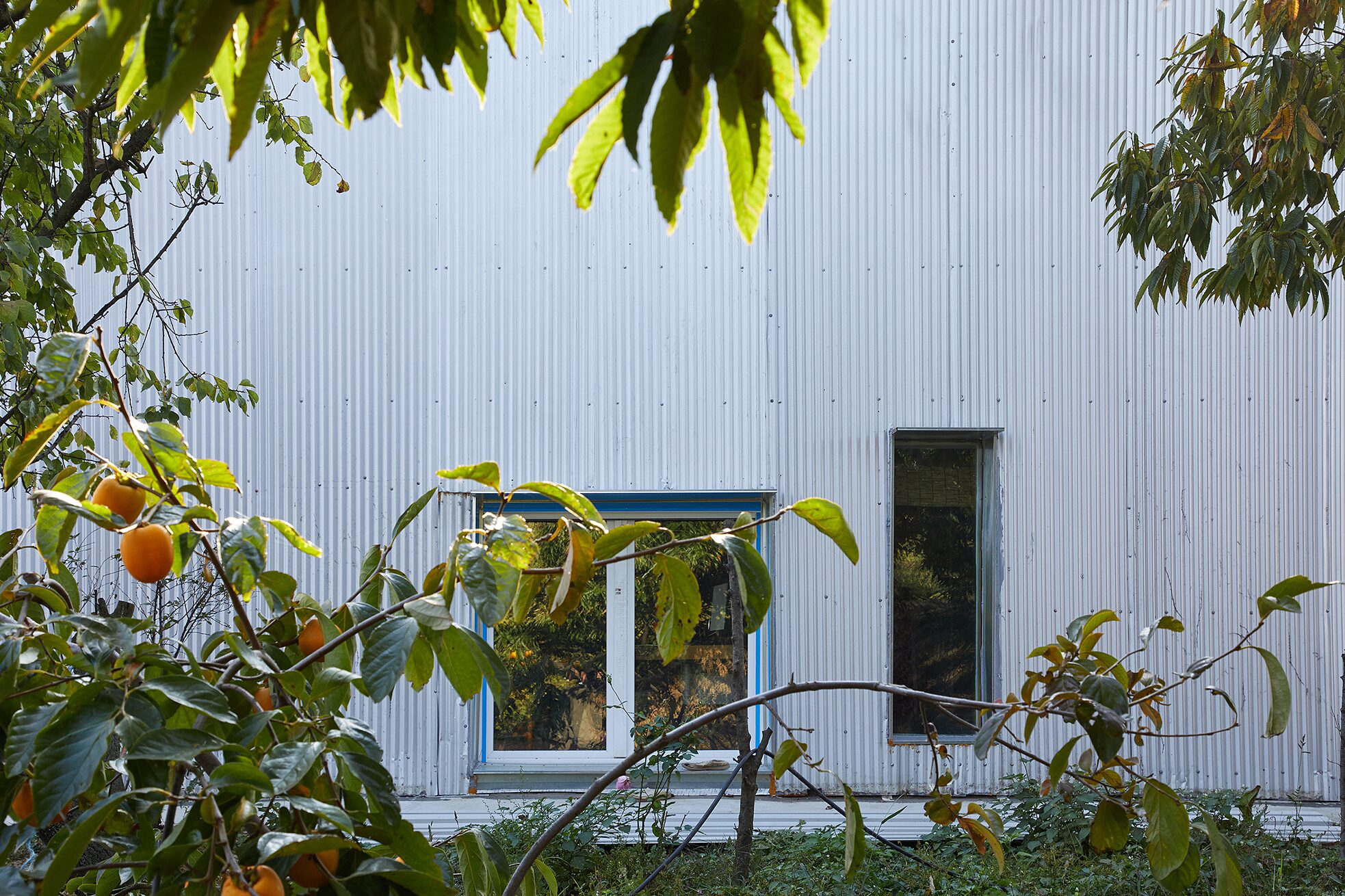 This formerly dilapidated house has now become a home for some elderly people, who no longer need to worry about the strong draughts in the countryside and high heating costs as a result. 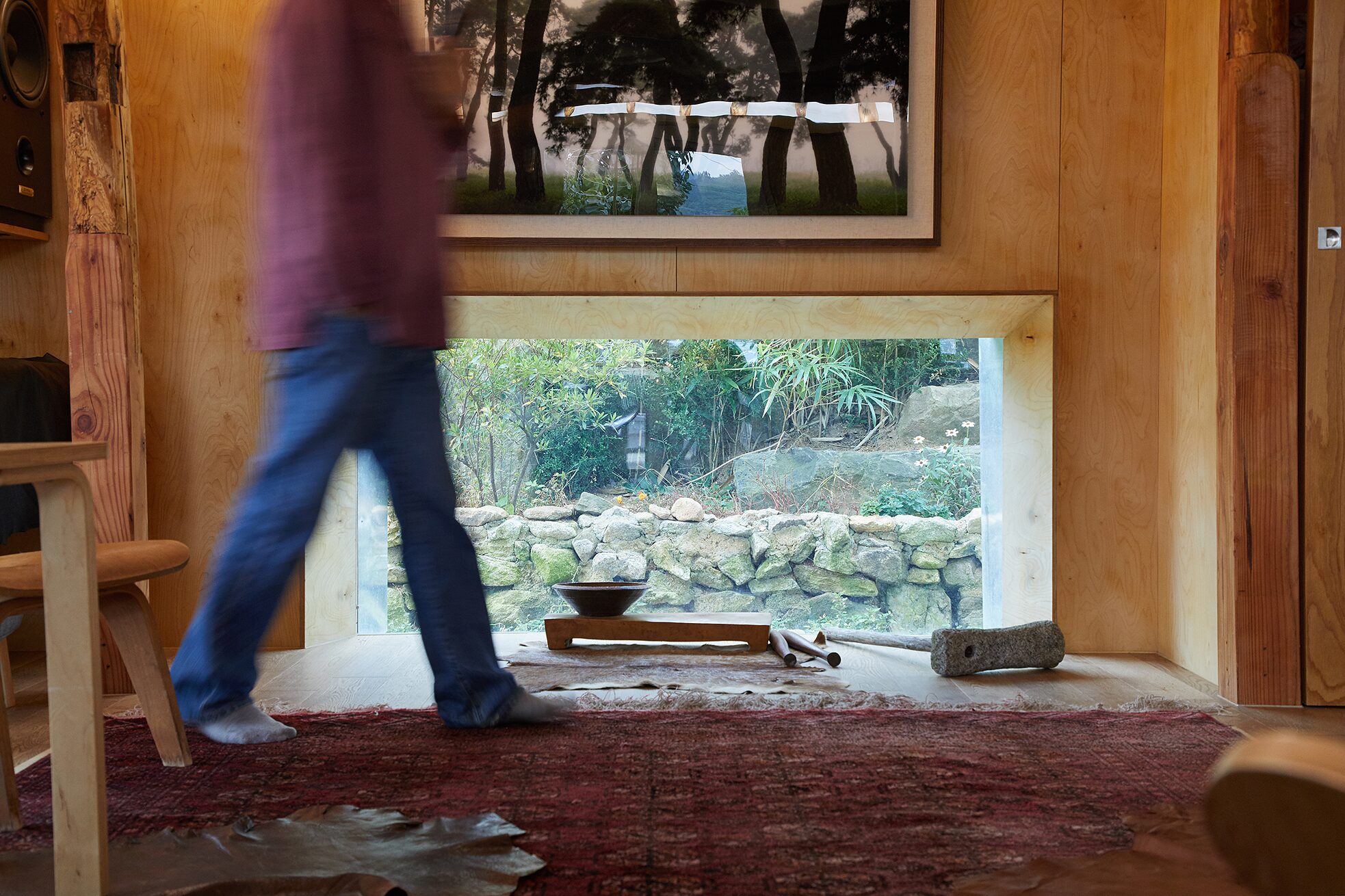 A window was inserted in the lower section of the wall to let daylight in and let the inhabitants look out at the house’s surroundings. | Photo: © Geun-young Lee

Byung Un Jung wanted a house in which it wouldn’t be too hot or too cold – and which, above all, would keep fine dust out. He fitted the exterior with urethane panels to keep the indoor temperature constant and prevent most of the heat loss. He used panels and airtight sealing and swelling tape to make the high-performance windows as airtight as possible. The heat-recovery ventilation system keeps the air circulating uniformly inside the house, minimizing heating and cooling requirements and creating a comfortable indoor climate. A roof overhang on the south side of the house blocks intense sunlight in summer, thereby reducing air conditioning requirements and electricity costs as a result. 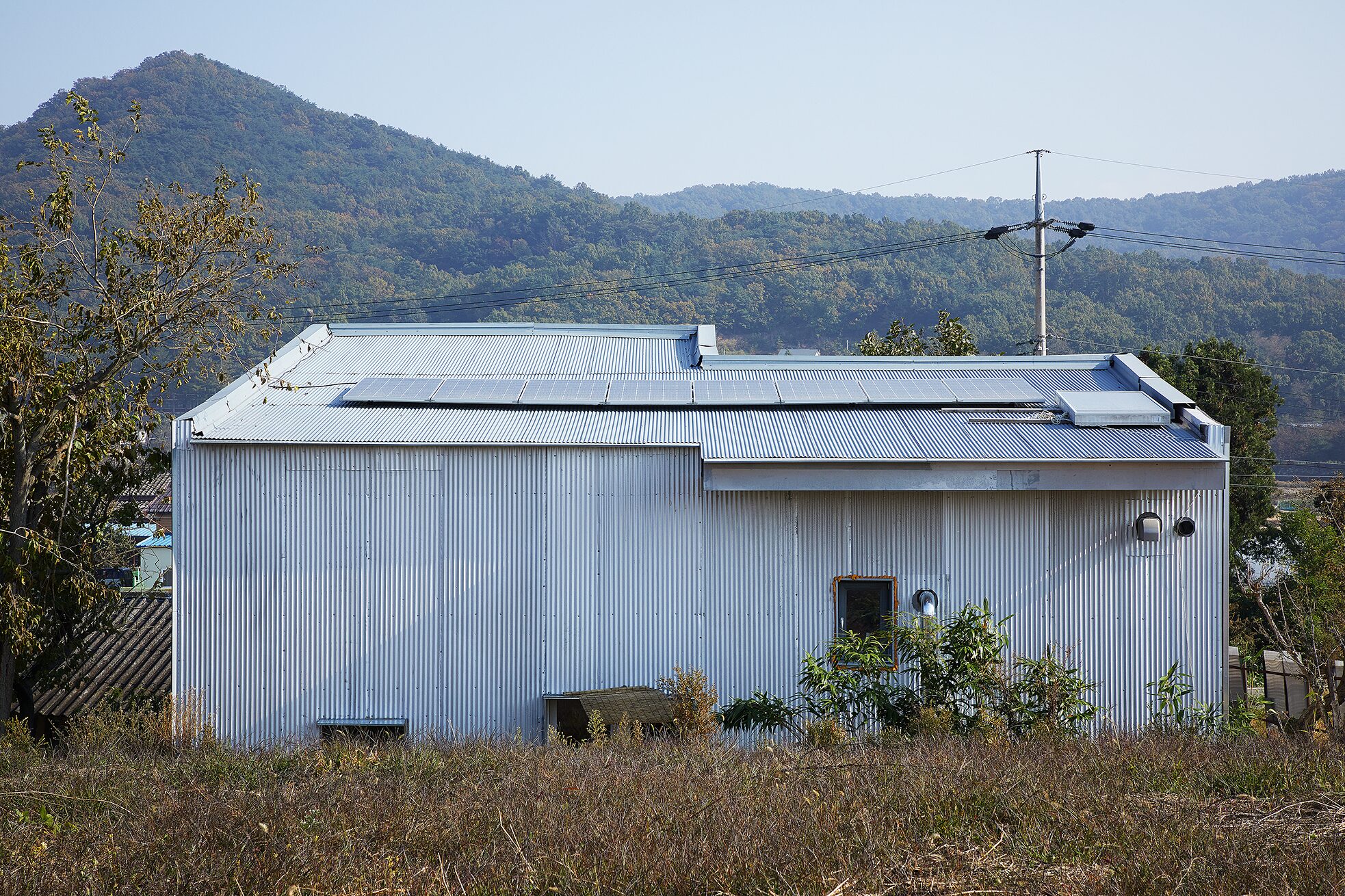 To maximize the house’s energy efficiency, it makes use of renewable energy generated on site. The solar collectors (3 kW) on the roof supply electrical energy as well as thermal energy for heating. Thanks to its green remodeling, Friendly Duck House’s heating and cooling load has been cut by 86.4%, and the total annual energy costs from roughly 6.6 million won (almost €5,000) to 190,000 won (approx. €150).

The shelf from the little pantry, on which grain used to be kept, is now used to hold audio equipment.  | Photo: © Geun-young Lee

Byung Un Jung began building so-called “passive” (i.e. ultra-low energy) houses in Korea ten years ago. He believes in the need to inculcate a deeper environmental awareness in future generations – at work as in their everyday lives – and hopes his lovingly remodeled Friendly Duck House will lead the way, serving as a model for Korean country homes. 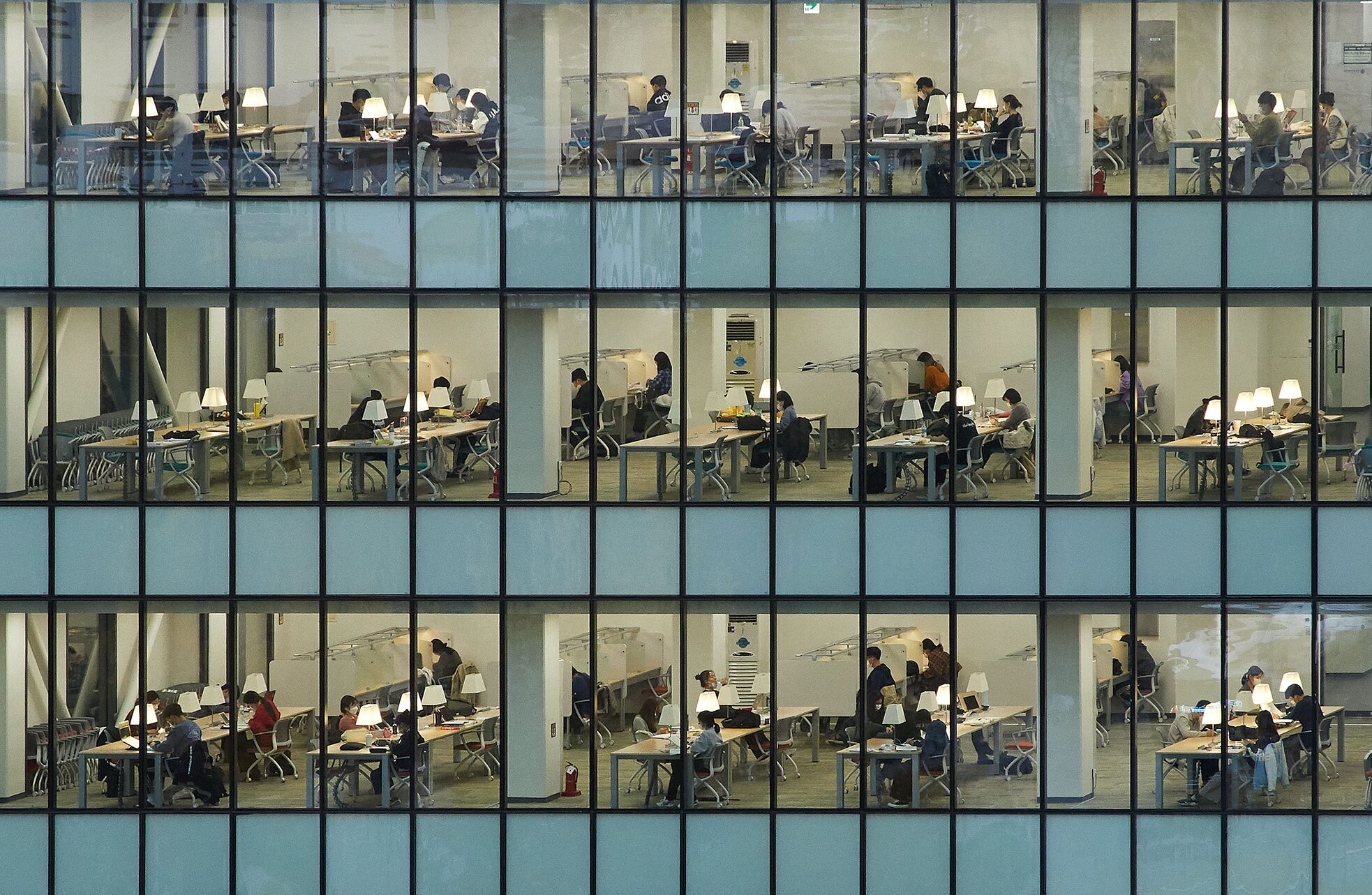 The Hankuk University library, completed in 1973, had outmoded fixtures, fittings and façade, and was poorly insulated, which caused considerable loss of energy for heating and cooling. What’s more, there was hardly any room for the steadily growing number of books – let alone sufficient rest areas for the students. The dead load of the building itself (i.e. the intrinsic weight of the structure and fixtures) had increased so much over time that its structural stability was in jeopardy. 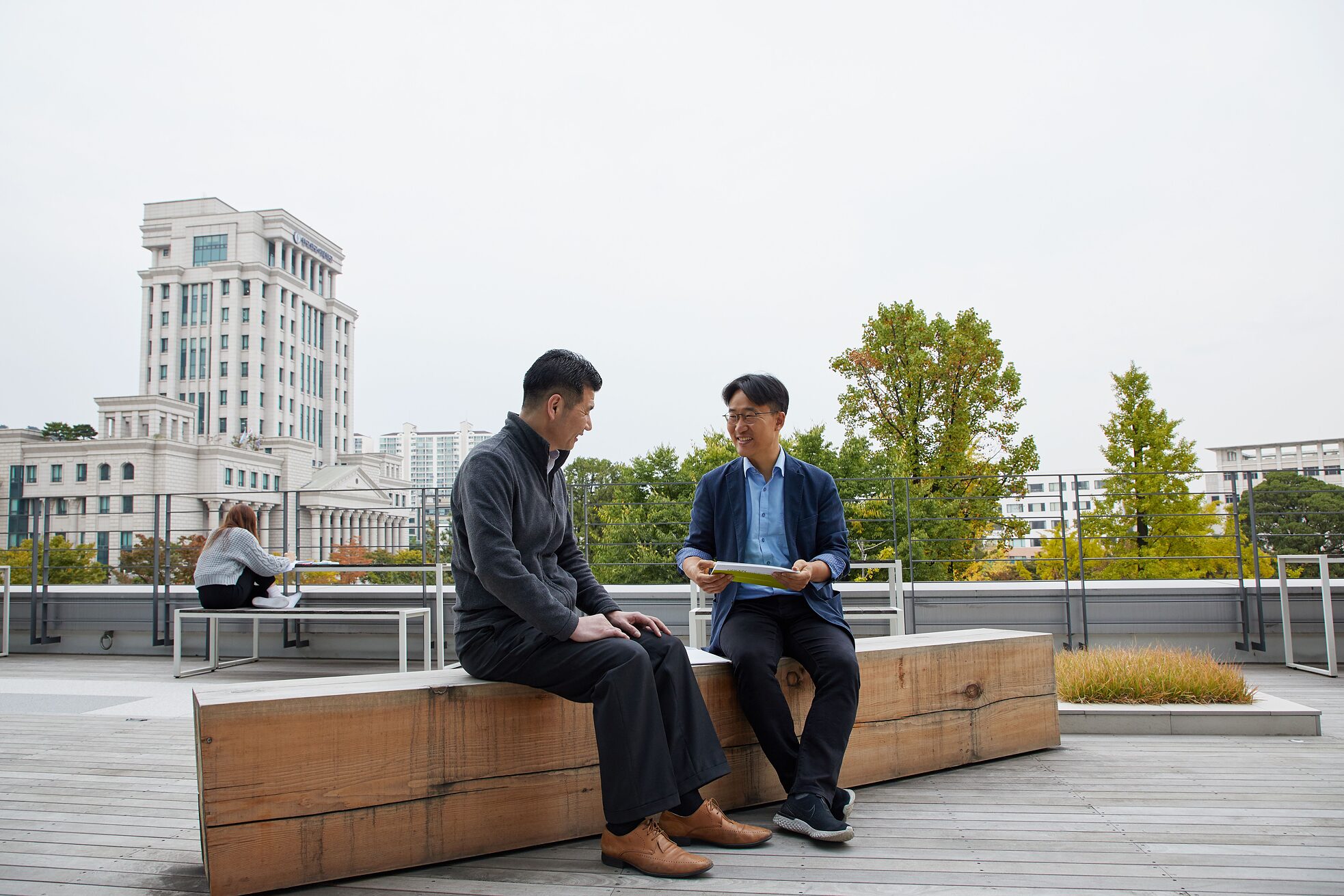 So the Hankuk University of Foreign Studies (HUFS) commissioned Posco A&C, an architectural firm specializing in green remodeling, to redesign the library. The university wanted a sustainable one-of-a-kind library in step with the times. This innovative project likewise took first prize in the fifth Green Remodeling Best Practices Contest, though in the category “Commercial Buildings”.

The university library has now become a “smart”, open library. The traditional image of a quiet, sober library environment has morphed into an open space that takes current cultural trends into account, including the fact that students nowadays are used to studying in public places like cafés. 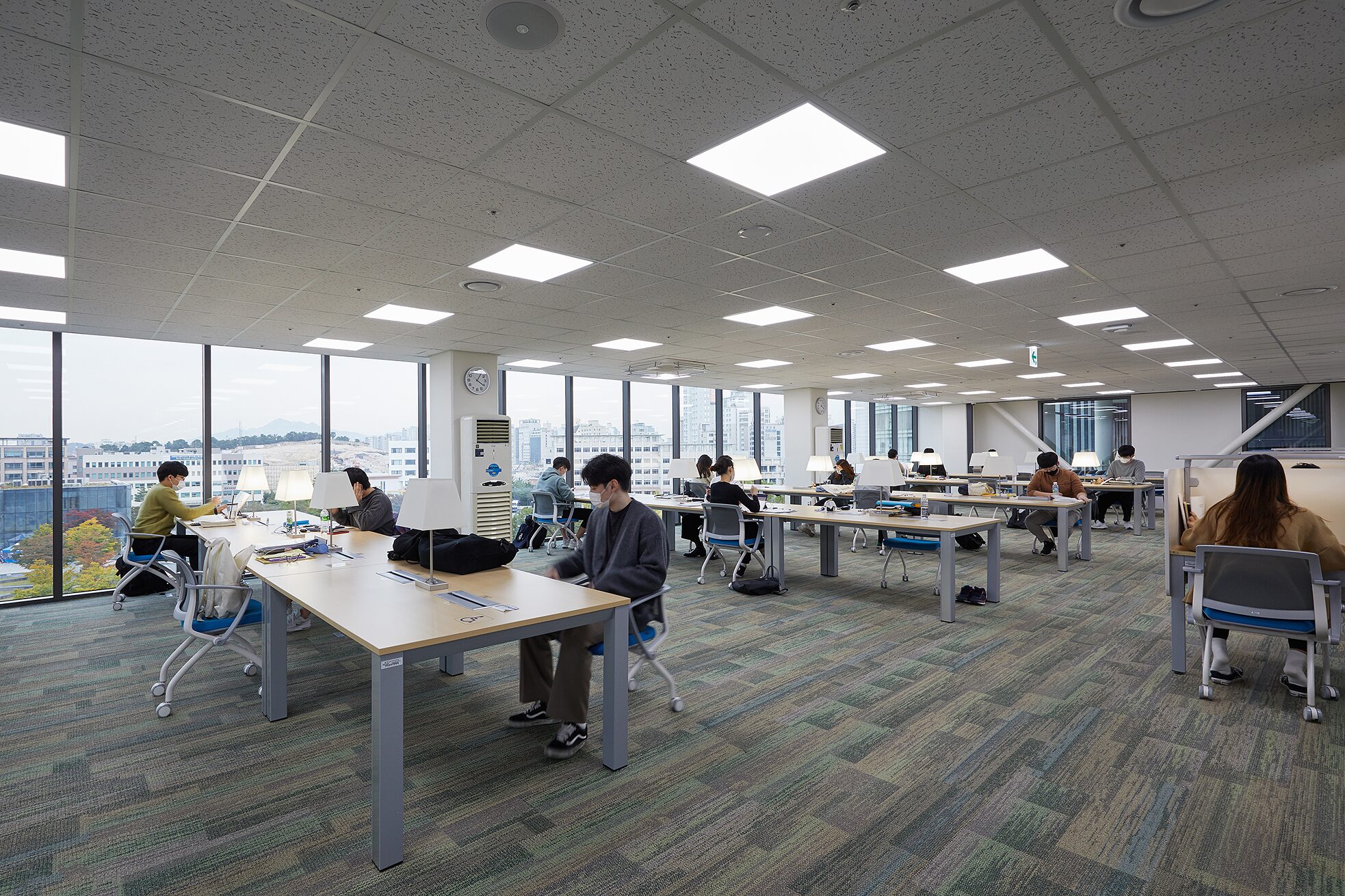 The best view of campus is from the reading rooms, where you can see into and out of the library, which allows for constant visual contact between the indoor and outdoor environments. The ceiling creates a sense of spacious openness, and the tables are spaced pretty far apart. Students can study by daylight here. And take a brief break on the nearby sofas. 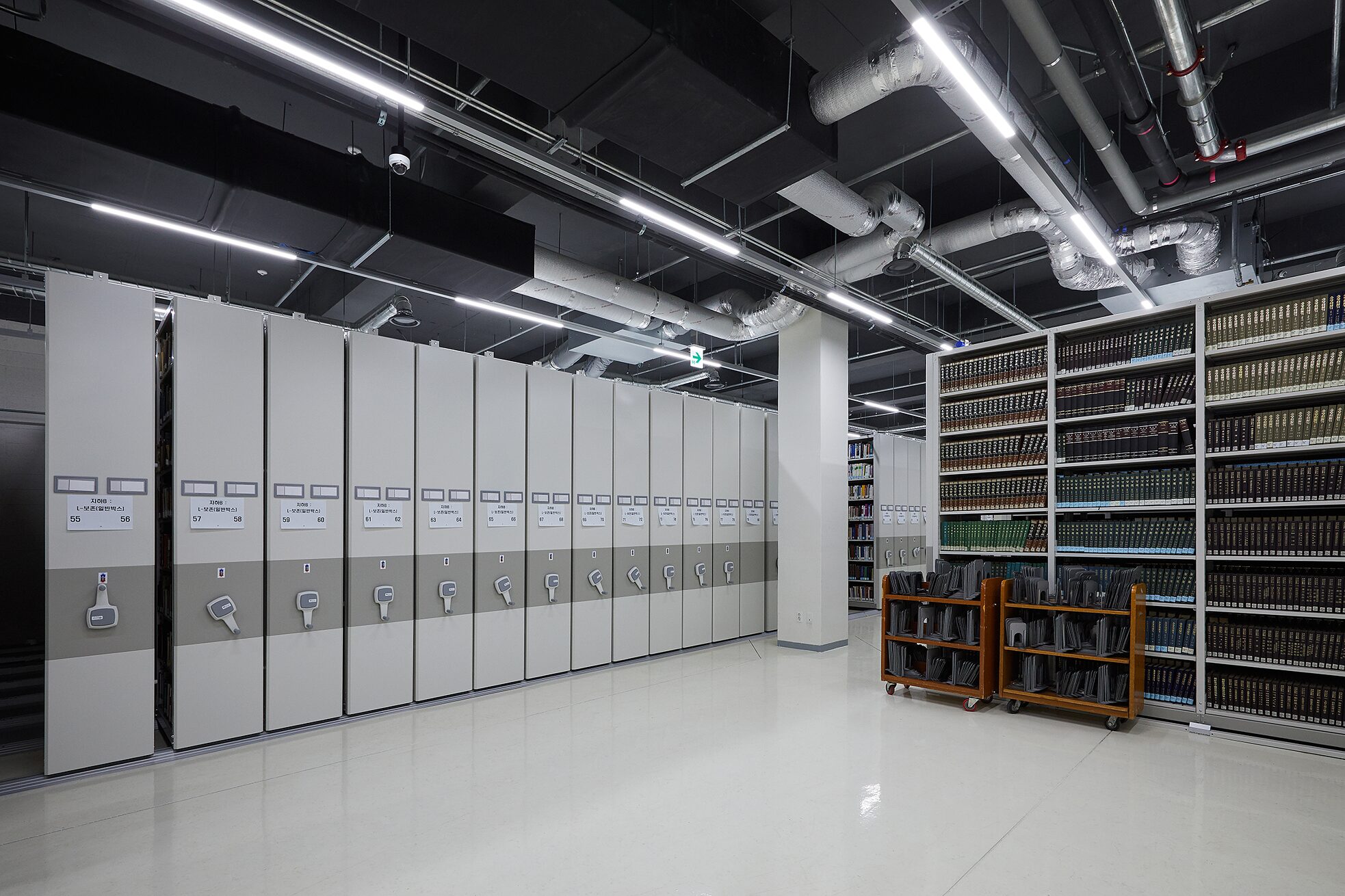 As is customary at universities that focus on the humanities, the library holds a collection of countless old books and documents. So a mobile shelving system was installed in the basement, containing roughly 700,000 books. The rooms that used to hold the stacks have been converted into spacious areas for individual reading and study as well as group work and relaxation. 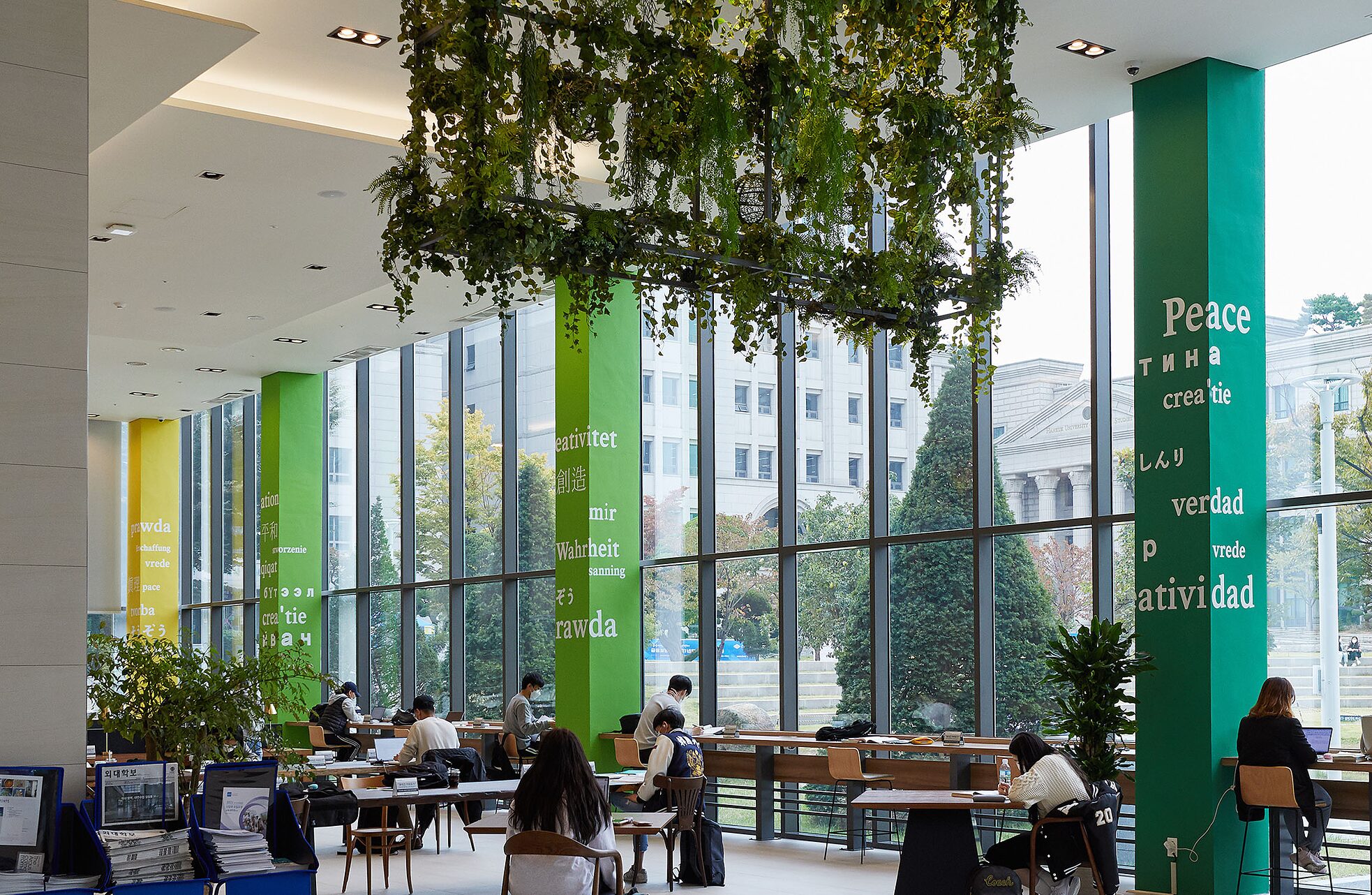 The library foyer is a public space open to the general public – including, of course, local residents. | Photo: © Geun-young Lee

The entrance hall on the ground floor, which gives the library its distinctive look, is literally an open space for visitors to use as they please. The main doorway has been moved back and in the hall they can read or chat. 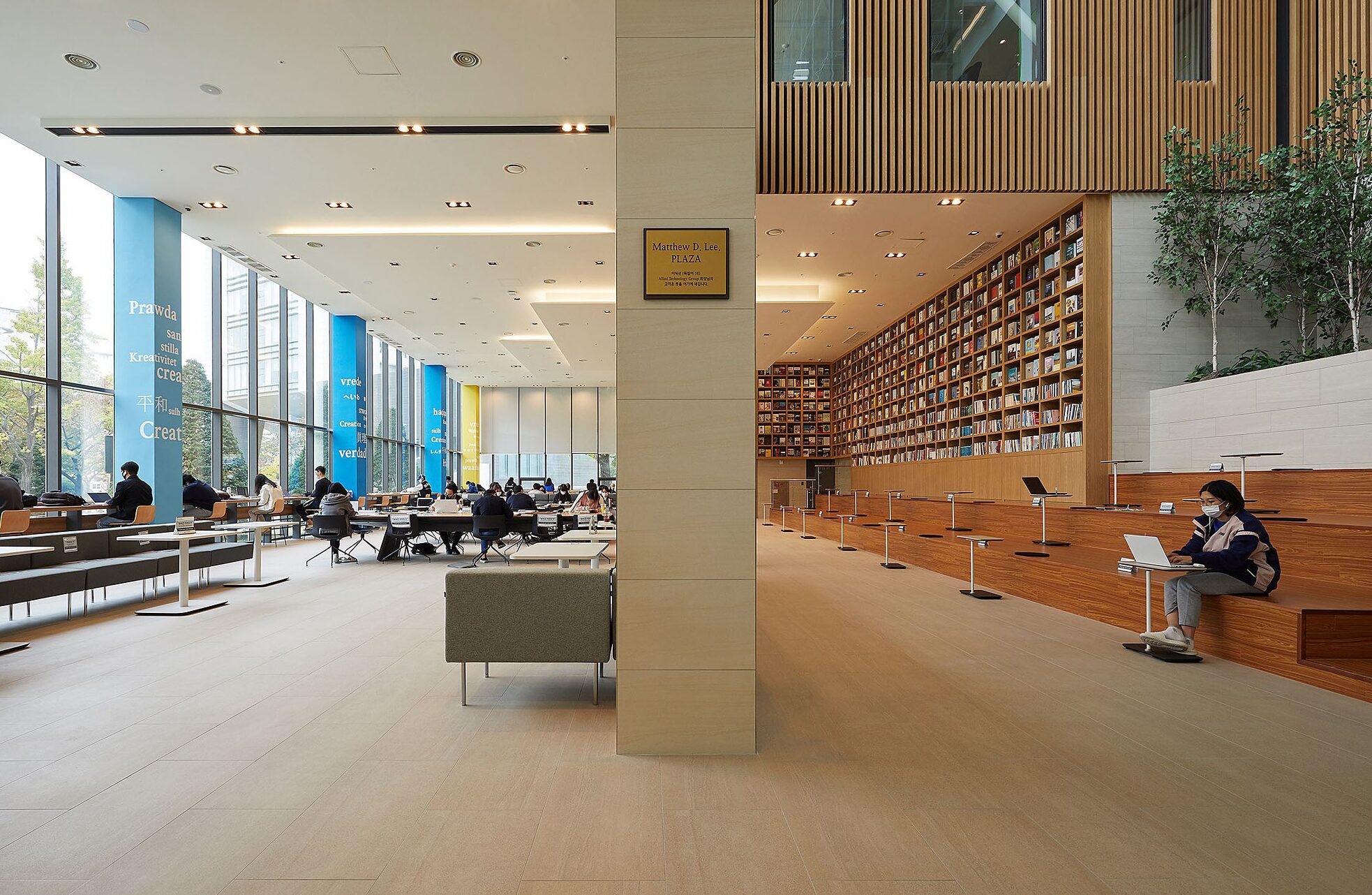 The primary objective of the library’s remodeling was to reduce its cooling load. To keep the summer heat out, only a few windows were placed on the south side of the building. The library now faces north in order to keep the energy load as low as possible. A glass curtain wall reinforces the impression of openness there. The highly efficient windows are triple-glazed to improve their thermal insulating performance and air-tightness. 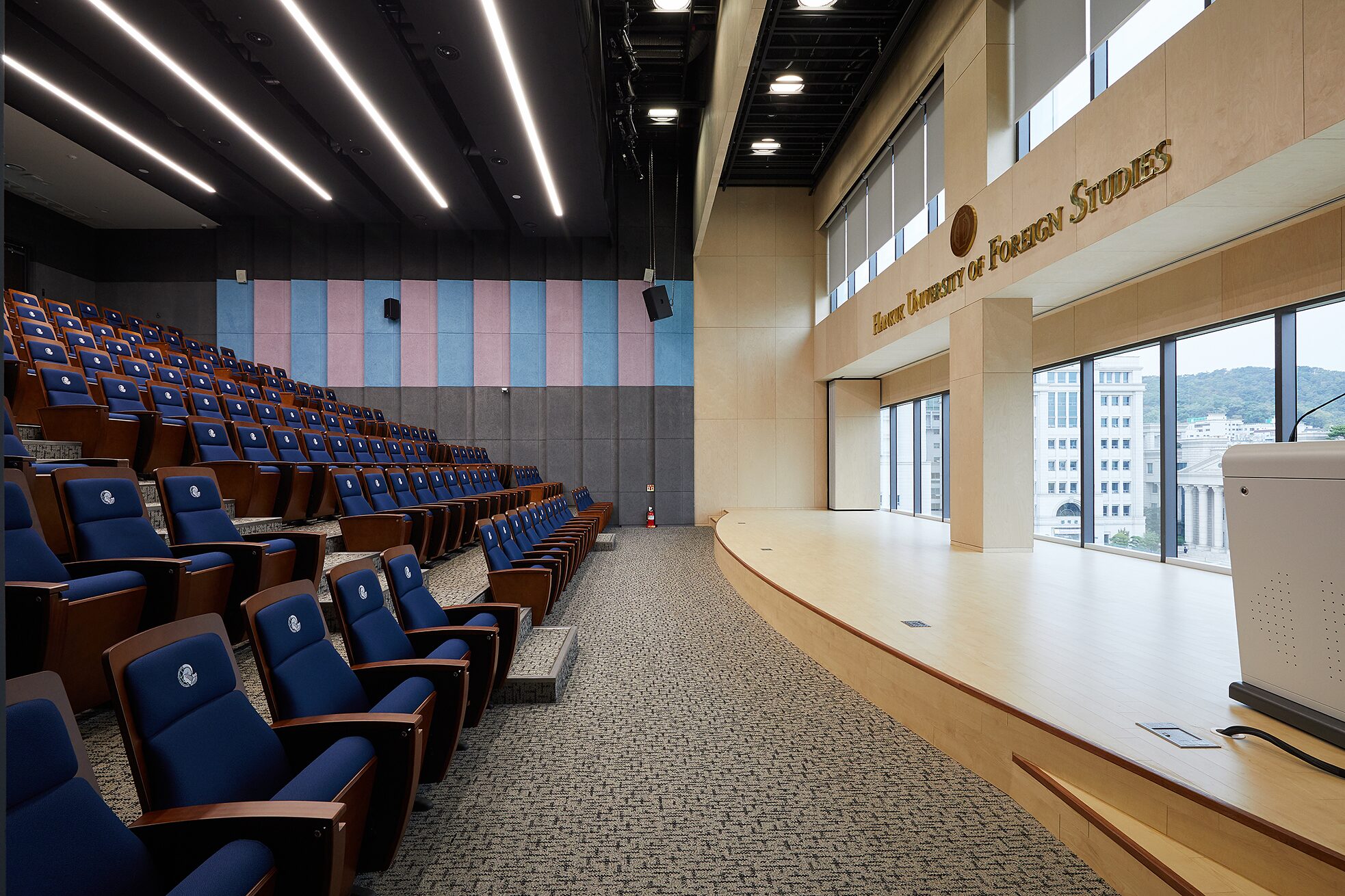 The architects used eco-friendly building materials and paints as well as according equal importance to environmental considerations in the building’s fixtures and fittings, choosing eco-friendly furniture for the sake of students’ health. The decentralized ventilation system with heat exchanger improves the indoor air quality and consumes half as much energy as conventional ventilation. And the new photovoltaic system (126 kW) generates over 142% of the total energy required for lighting. So the remodeling cut the library’s energy consumption by 53.4%, even qualifying for the highest energy efficiency rating (1+ under Korean standards) and for G-SEED (Green Standard for Energy & Environmental Design) certification {ist gar nicht klar, was Grade 4 bedeutet, ist aber vielleicht mittelmässig… Mangels näheren Erklärung würde ich “Grade 4” deshalb einfach weglassen, also schreiben: “… and for G-SEED certification”}. 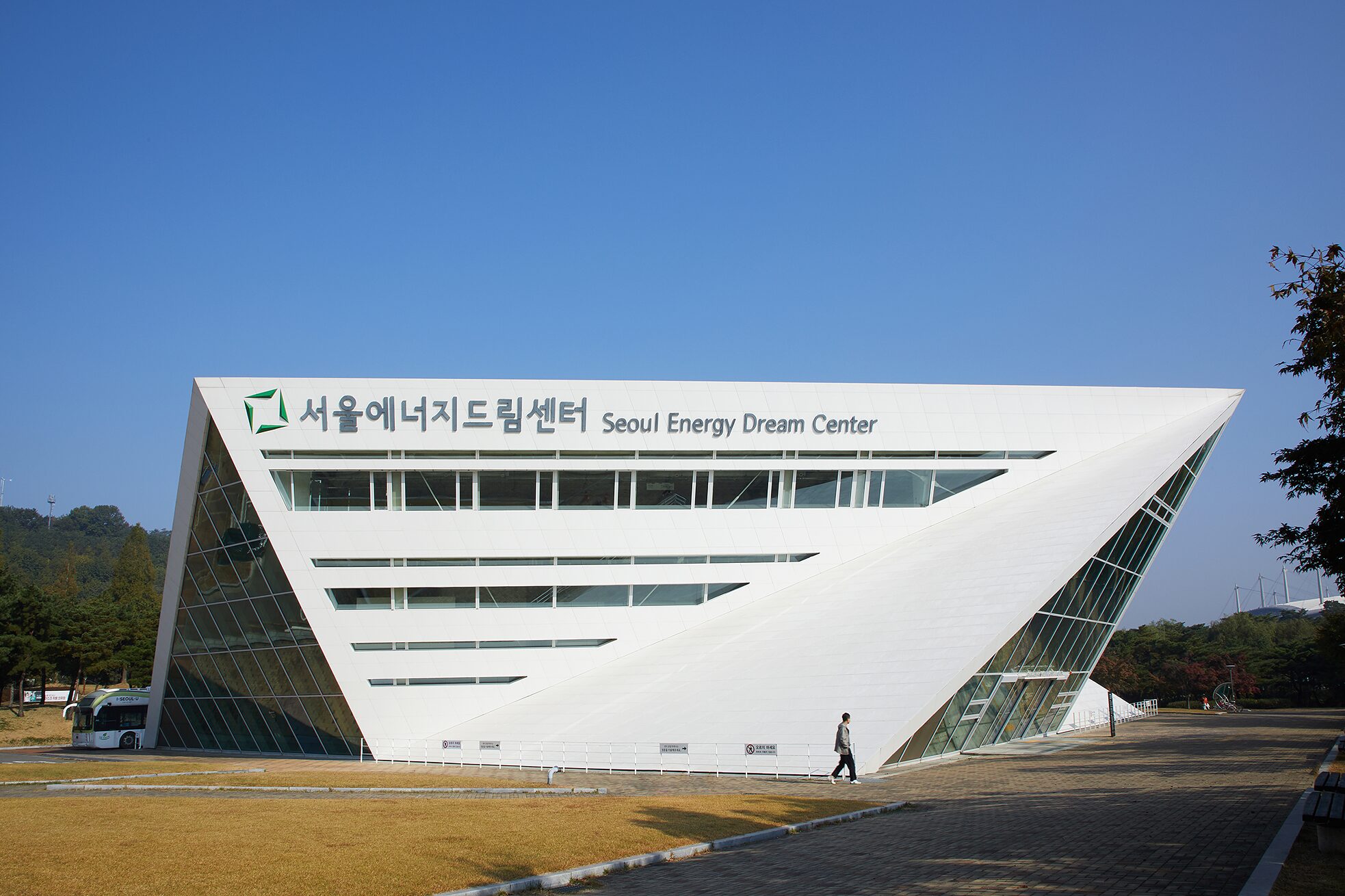 Nanjido, an island on a branch of the Han River on which orchids and thyme once flourished, became Seoul’s official dump site in 1978. The city transformed the ginormous landfill into an eco-friendly local recreational area in 2002. And the Seoul Energy Dream Center, the first environmentally friendly zero-energy public building in Korea, opened there in 2012.

The Seoul Energy Dream Center is the city's new center for renewable energy. The facility itself runs on solar energy and uses geothermal heating and cooling systems. The building is fitted out with an energy-saving envelope and state-of-the-art building services systems. Thanks to this combination of energy-saving features, its annual energy consumption is 30% lower than the average for comparable buildings in Korea. 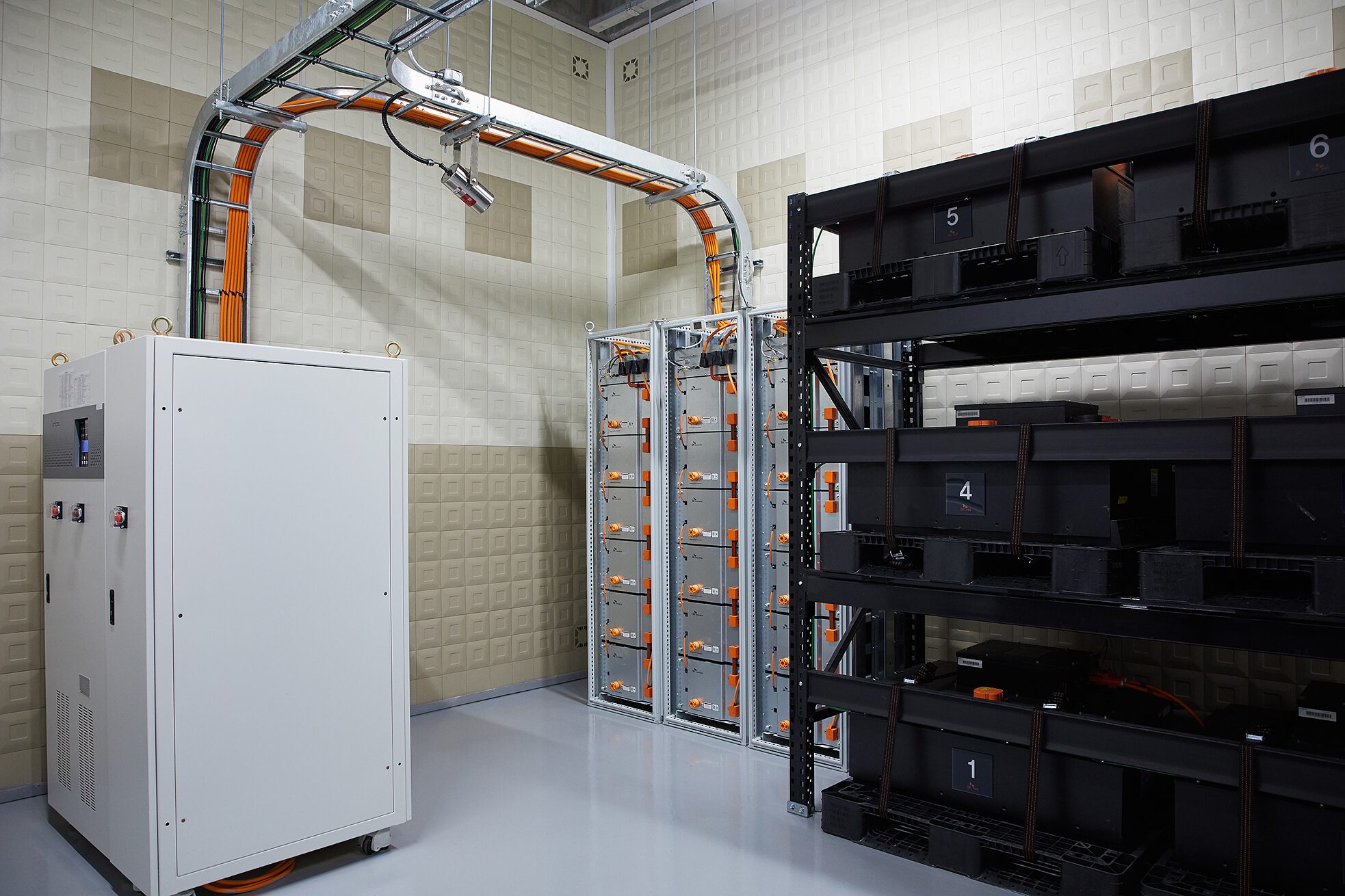 Geothermal heating and cooling system: The geothermal probe system draws on a constant source of geothermal energy and is used for cooling as well as heating. It uses 20–25 % less power than other cooling and heating systems.

Walking around the building, you’ll notice various architectural elements designed to minimize excess energy consumption and increase energy efficiency. The outer walls slope upwards and outwards to allow for seasonal changes in the position of the sun: like the eaves of a hanok, they shield the interior from intense sunshine in summer, and yet admit ample sunlight to save heating energy in winter. The white wedge-shaped roof projections, mounted along the façades like wings, reflect the sunlight into the interior in order to supply sufficient daylight. The electrically operated sunshade on the outside of the building automatically adjusts to changing weather conditions, such as temperature, sunshine and wind speed, thereby increasing the building’s energy efficiency as well. Furthermore, less energy is consumed for lighting by separately regulating the amount of light entering the interior.

The Seoul Energy Dream Center is a zero-energy building, generating as much energy as it consumes. It’s a place where visitors can experience the complex interrelationships between energy, architecture and climate change with all their senses.

The center also holds a wide range of events and activities revolving around climate change and energy, including an Eco-Tour, workshops about zero-energy construction for young people, guided tours of various exhibitions and even puppet theatre!

Lee Geun-young is a Seoul-based photographer and filmmaker.