One of the fundamental rights of human beings is the right to feel safe, protected. Especially in moments of change, shock, disaster, in moments when the old ways of protection fail. This right is strongly connected to the right to housing. United Nations defines adequate housing as legally secure, affordable, and habitable, with good infrastructure, services and cultural access. The goal of this article is to contribute to the discussion on climate caring architecture with a sum-up of arguments inspired by the Climate Care Academy conference, the project of Year of Climate Care connected to the New European Bauhaus initiative

The war in Ukraine has recently made many people lose their housing and feel threatened. It forced them to leave their homes. The impact of the war in Ukraine has spread beyond borders. Slovakia, among other countries, has faced large-scale migration of refugees. Slovak government so as the general public had to deal with emergency accommodation suddenly, without previous similar experience and unprepared.

It is different than, for example in East Africa or South Asia, where the displacement of people as a result of the climate crisis, is already experienced. The last seven years have been the hottest on record. This year, the experts of the International Panel on the Climate Crisis have issued a new report. Its content was the latest scientific knowledge on the impact of the climate crisis on life and, within it, on the ever-increasing migration of people from the affected countries. Climate migration, as Barbora Šedová of the Potsdam Institute for Climate Impact Research argues, is an important adaptation strategy for many places. These are mainly rural areas where people live in agriculture and who need to be able to move, for example, to cities where other livelihoods can be found. The national governments so as international humanitarian organizations of impacted countries, in Europe for example Greece, are establishing supporting infrastructure.

The Institute has worked out a calculation for 2050 in which, assuming inaction or slow action on adaptation measures, a climate crisis could lead to up to 216 million climate migrants and cause a high increase in violent conflicts. This number could be reduced by 80% if cities acted now as part of a larger policy change.

The issue of climate migration and related policy changes is not yet acute in Slovakia. But the lack of infrastructure and preparedness of urban structures for such anticipation of an increase in migrants has only been highlighted by our experience with crisis management of housing for people fleeing the war in Ukraine, as well as our experience with long-term strategic management of housing for the people without shelter.

High responsibility for unpreparedness of housing and the environments we inhabit as such, bears the disciplines of planning and architecture in particular. These disciplines often move only within a largely predefined political terrain, thereby (re)producing the world as it is. A new international initiative of the New European Bauhaus, however, is trying to change this discourse. In Slovakia, its aim is to develop an innovative framework to support, facilitate and accelerate the green transformation and start systemic change. Although it is something new and innovative, it is hardly and very slowly helping to change the established standard.

HOUSING AS A MATTER OF CARE

Temporary housing is crucial for the survival of people threatened by a disaster. War context is a man-made disaster, there are then natural made disasters like an earthquake and technological ones, for example, a nuclear power plant explosion. The climate crisis, or the new climate-caring regime, together with the above-mentioned disasters, deepening inequalities and migration are the same threat. Recently deceased philosopher and sociologist Bruno Latour sees migration as the most understandable threat to people's dreams of security and identity.

Since the beginning of the war, almost one million people have crossed the Slovak-Ukrainian border. Many of them did not stay in the country and continued on, and many are returning. For example, in the last week of October, the number of people returning was higher than those arriving. However, it is still a high number of those who have been staying in emergency shelters for several months now. One such shelter is a large capacity centre, formerly a building of Slovak Technical University in Gabčíkovo, a town near Bratislava. There are approximately 1000 children, women and the elderly. A lot of them are staying there long-term. This emergency accommodation is not adapted to permanent living and certainly does not meet the UN standard of adequate housing, although humanitarian organizations are trying to accustom it to at least the main needs as much as possible.

We can't actually move them out of this 'temporary' situation, despite their status as leavers, because of the Slovak housing reality. Almost 500 000 housing units have to be built in Slovakia to achieve the EU average rate of housing per 1000 citizens, including weekend cottages. Slovakia is a country without almost no public housing due to the 90' law (Zákon o prevode vlastníctva bytu). New public housing is slowly being built only now and new commercial housing is inaccessible for most of the population because of the price. Moreover, the EU average for rooms per person is 1,7 whereas in Slovakia it is 1,2 rooms per person which causes huge housing overcrowding. The marginalised communities suffer from overcrowding the most. This was stated during the Climate Care Academy conference by Zuzana Olšinová from Slovak NGO Proti prúdu – centred around people without shelter.

While vulnerability to migration is “solved” in some countries by building high fences, the vulnerability to crisis caused by changes of the climate permeates whatever fences or borders we build, and these will not protect us from it. Therefore, any borders or even the sovereignty of states have no place in the new climate regime. Our next goal is to find and manifest different new layers of care, helping all of us feel safe without associating one's sense of safety with identity-based belonging (whether migrant or not).

EXPERIENCE IN THE HUMANITARIAN AID SECTOR AND RESILIENCE

The topic of care, migration and the right to housing is starting to be addressed in planning. The professionals who deal with these issues on a daily basis met for example under Climate Care Academy. It works with the term climate care (not crisis), changing the language and with it the discourse to be more challenging and motivational, for the architecture to be aware of its position within the power and to be already part of positive change. It is also one of its outcomes that the global humanitarian experience is finally acknowledged in the planning disciplines and vice versa.

A community that cannot cope, because of its lack of capacity or resources, needs help. Support is usually provided by the national government which calls for international support. After requesting support, foreign NGOs can come and the humanitarian sector is involved. The international humanitarian sector is not just about voluntary aid. It is a huge professional sector in its own right, it is well organized and has independent expertise which might be most needed in the future. By connecting to it, we can be better prepared, have the infrastructure, and be able to engage within the communities that we have.

Coming back to Latour, he sees this not in coming back to “nationalism” or on the other hand in “globalization”. This is the third possibility he refers to as “return back down to the Earth”, attaching ourselves to the soil rather than territories and at the same time globalizing oneself. Architecture can help with both. In Greece, for example, the local population was firstly open to helping refugees, but with time they became exhausted and refusing. There was a need for cocreating not only with refugees but also with locals What is interesting about the Greek experience, for example, is that participatory practice does not so often find its way into humanitarian work and that when it does it tends to be an exception. This can be added value brought by spatial practitioners.

One of the inspiring case studies from the field of emergency architecture thematizing the role of architecture, humanitarian discipline and planning in today's world is the reality of Polish, Ukrainian or Slovak use of Shigeru Ban's Paper Partition System. It was first used in Japan in 2011 after the earthquake and tsunami. Emergency shelters are often situated in large spaces, which are accessible immediately but do not provide any privacy. Paper partition system is a great emergency housing solution that relies on thick paper rolls and curtains. It creates habitable private "cells" within open spaces.

In Slovakia, this system is used in one of the asylum centres in Bratislava and in Košice. Its results for temporary accommodation are excellent. Such temporary architecture and its future tendencies can change the way we are thinking about architecture as an unchangeable decision brought from the top. The system could even be extended, for example, to be used to test new housing options before they are built.

However, it is problematic in the current situation, where temporary becomes permanent. This is the case, for example, in the large-capacity centre in Gabčíkovo. Like paper "cubicles", the low-quality temporary Ikea space solutions are getting tremendous wear and tear over time. Despite the pairing with low-quality, cheap materials, however, the architects from Spolka connected to a local humanitarian organization Mareena which resulted in an effort to create child-friendly environments in different spaces of the building.

A "test"/temporary housing solution in Slovakia often stretches over several months. Short-term solutions have to be linked to long-term ones, which is of course difficult in a state like Slovakia where there is almost no public housing.

Linking architecture and the humanitarian sector, and with it, actors on a national and international level together with academia and the local population, can deliver interventions that enable a New European Bauhaus-like enduring architecture of possibility, beautiful and sustainable. Responses that in time promote the capacity for action, peace and resilience. After all, the initiative of the New European Bauhaus also mainly requires interdisciplinarity, something that humanitarian work has a lot of experience with.

As the dynamics of external political-market forces further weaken the role of architects in spatial development, it is necessary to recognize their power and potential and treat it accordingly. People who influence the shape of cities are the first to test different ways of building but also of working together. By coming together, drawing inspiration from a humanitarian sector that can react quickly, we might be able to push for the necessary policy changes for a new climate-caring regime too. A regime that would focus more on the value of diverse natural beings than on the systems of production. By integrating the experience and approach of the humanitarian sector in interdisciplinary spatial practice, its actors would thus place importance on the processes that create space and add social and political dimensions of durable resilient place-making practice that affect the everyday lives of people and other actors – no matter the boarders and identity, animate or inanimate.

The text is inspired by the lectures, workshops and discussions that took place during the Climate Care Academy in August 2022. The Academy programme took place in the Creative Centre FAD of the Faculty of Architecture STU in Bratislava and included a visit to the refugee centre with the installation of the Paper Partition System and a visit to the creative centre Nová Cvernovka. The academy was part of the Year for Climate Care 2022 project and was facilitated by the author of this text. 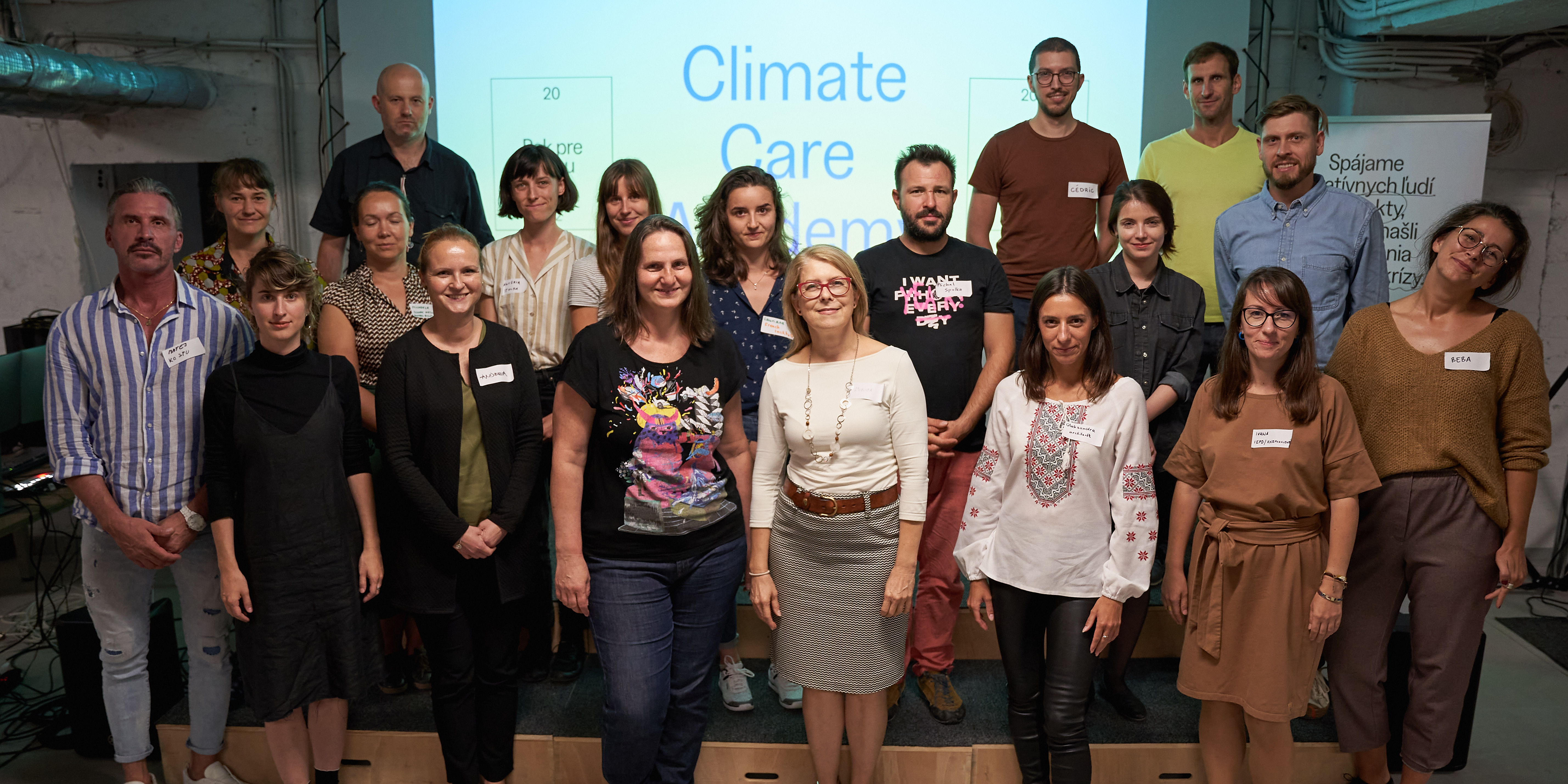 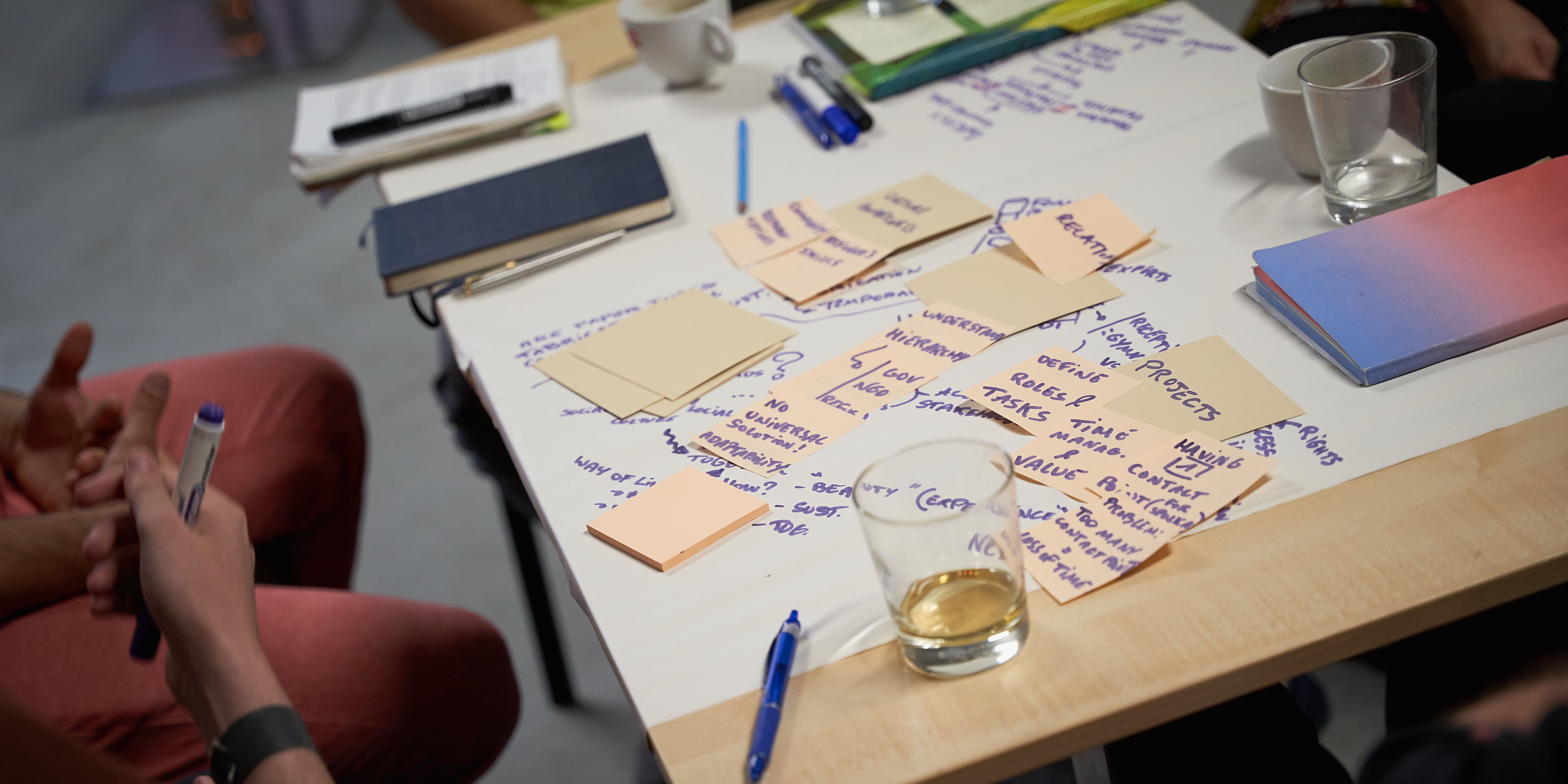 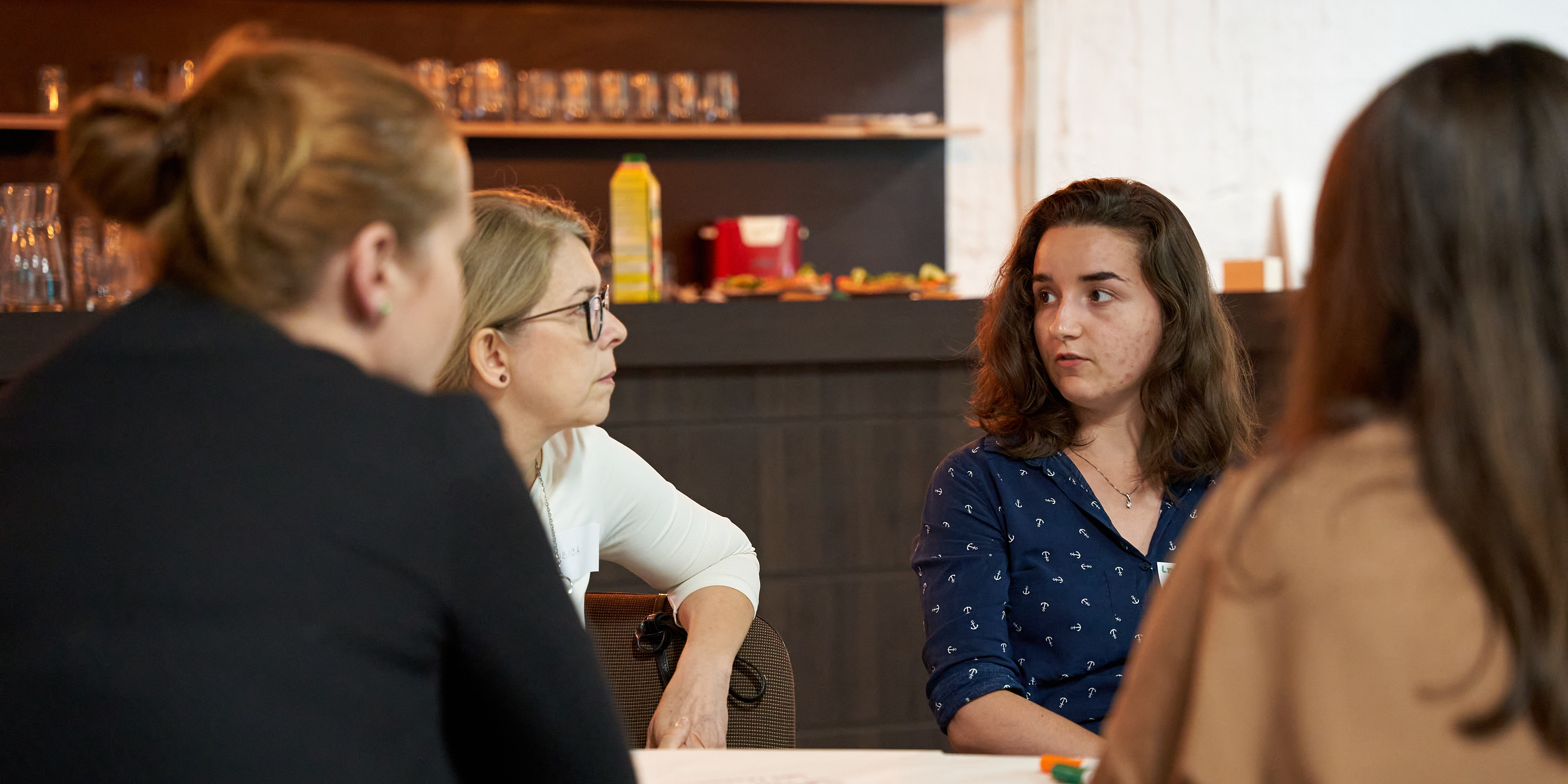 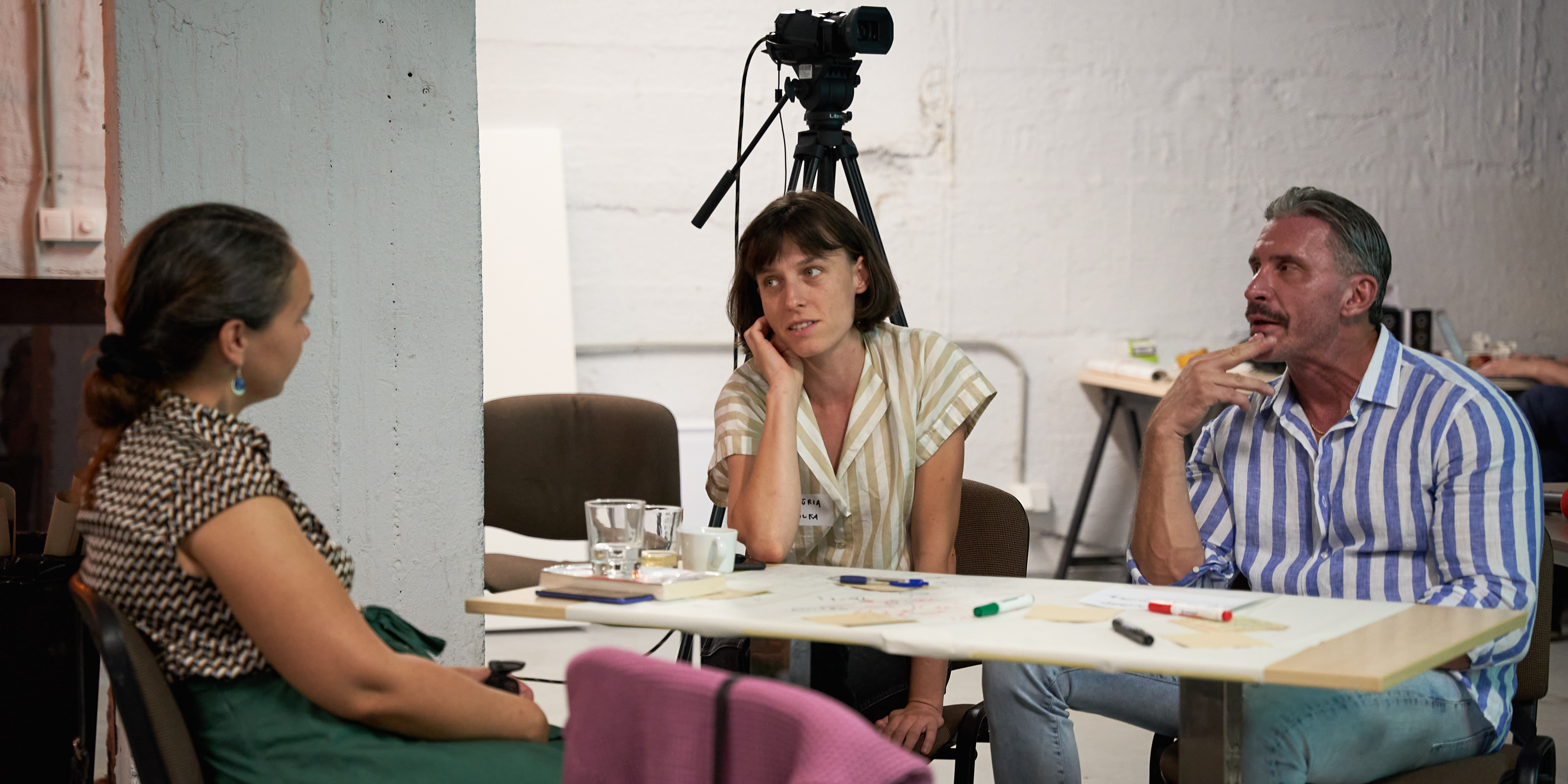 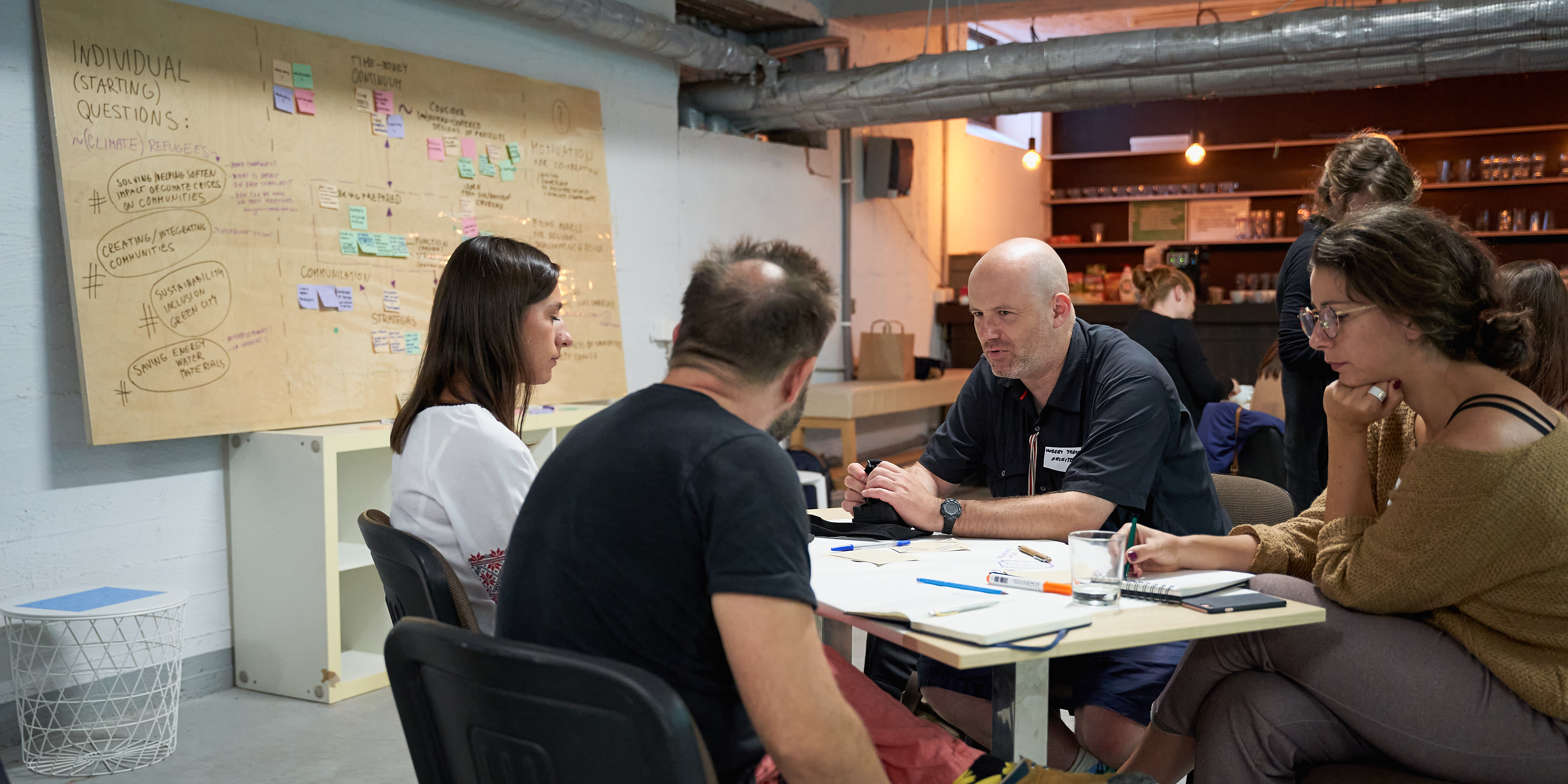 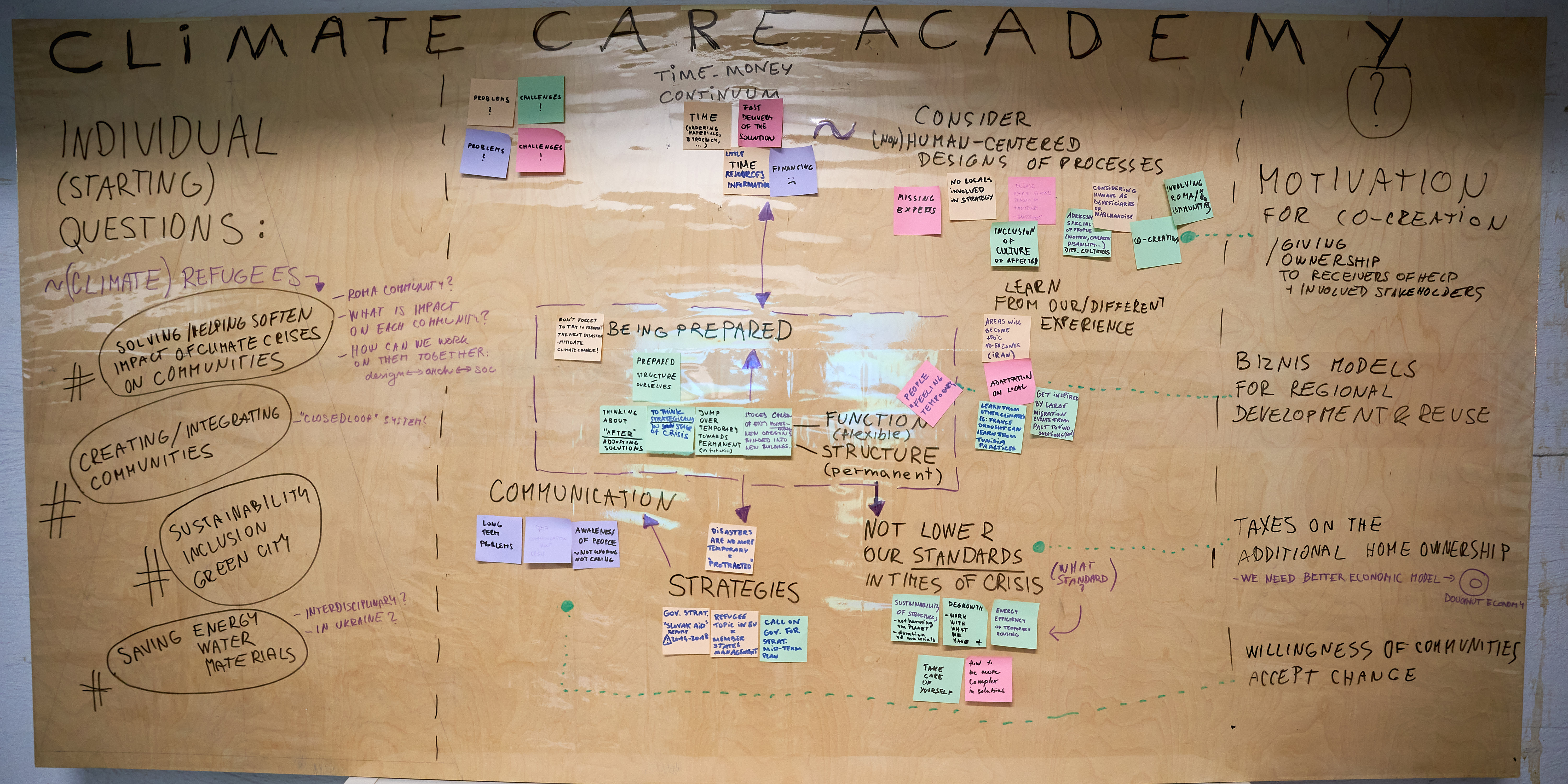