Building Sustainability in Norway: Wood Instead of Concrete (EN)

Norway is responding to the growing pressure on its urban centres by using wood in innovative ways. This sustainable raw material is experiencing a veritable renaissance in view of climate change and depletion of resources.

On the road to Brumunddal, a small town with a population of nearly 10 000. Forested slopes are interspersed with farmland.

At the point where the E6, going up north from Oslo, for a few kilometres runs alongside the shores of the Mjøsa  – Norway’s largest lake – the panorama stretching before you on a clear, cold winter morning is almost surreal.

The Mjøstårnet (Mjøsa Tower) rises impressive 85.4 metres above the landscape with its dusting of powder snow. The mixed-use building offers a combination of residential and business units over 18 storeys, making it not only the world’s tallest timber tower but also one of the tallest buildings in Norway. The dynamic façade seems to capture the soft morning light. But what’s a skyscraper doing out here in rural Norway, miles away from the nearest city? 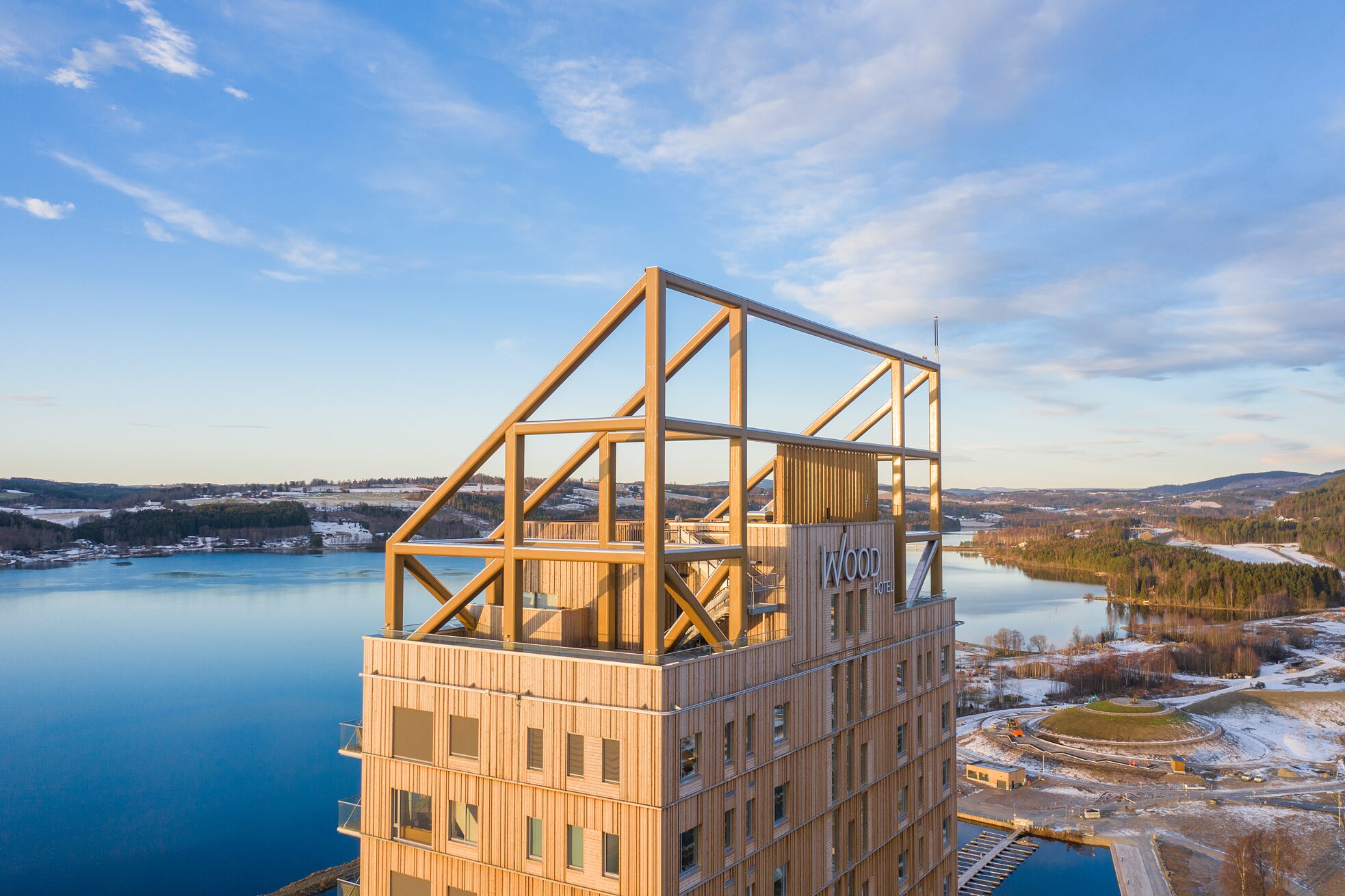 “The idea was a response from the architects to politicians calling for a green shift,” explains contractor and property developer Arthur Buchardt in a promotional film, marking the Mjøstårnet’s inauguration in summer 2019. The initial project sketches are said to have been done on napkins during a meeting with a business partner.

As soon as you step into the lobby of the cutting-edge timber-panelled “Woody” hotel, which occupies the first two storeys of the building, you notice a pleasant aroma. The wood used for the interior not only ensures a balanced indoor climate, but has also proved popular thanks to its design versatility. The minimalist aesthetics of the spiral staircase leading up to the second floor, at the centre of the restaurant, is an example of this.

The first hotel guests are just settling down at the light wooden tables. Huge windows offer views over the lake and the surrounding countryside.The peaceful idyll is marred only slightly by a few diggers and construction vehicles still working in the hotel grounds. 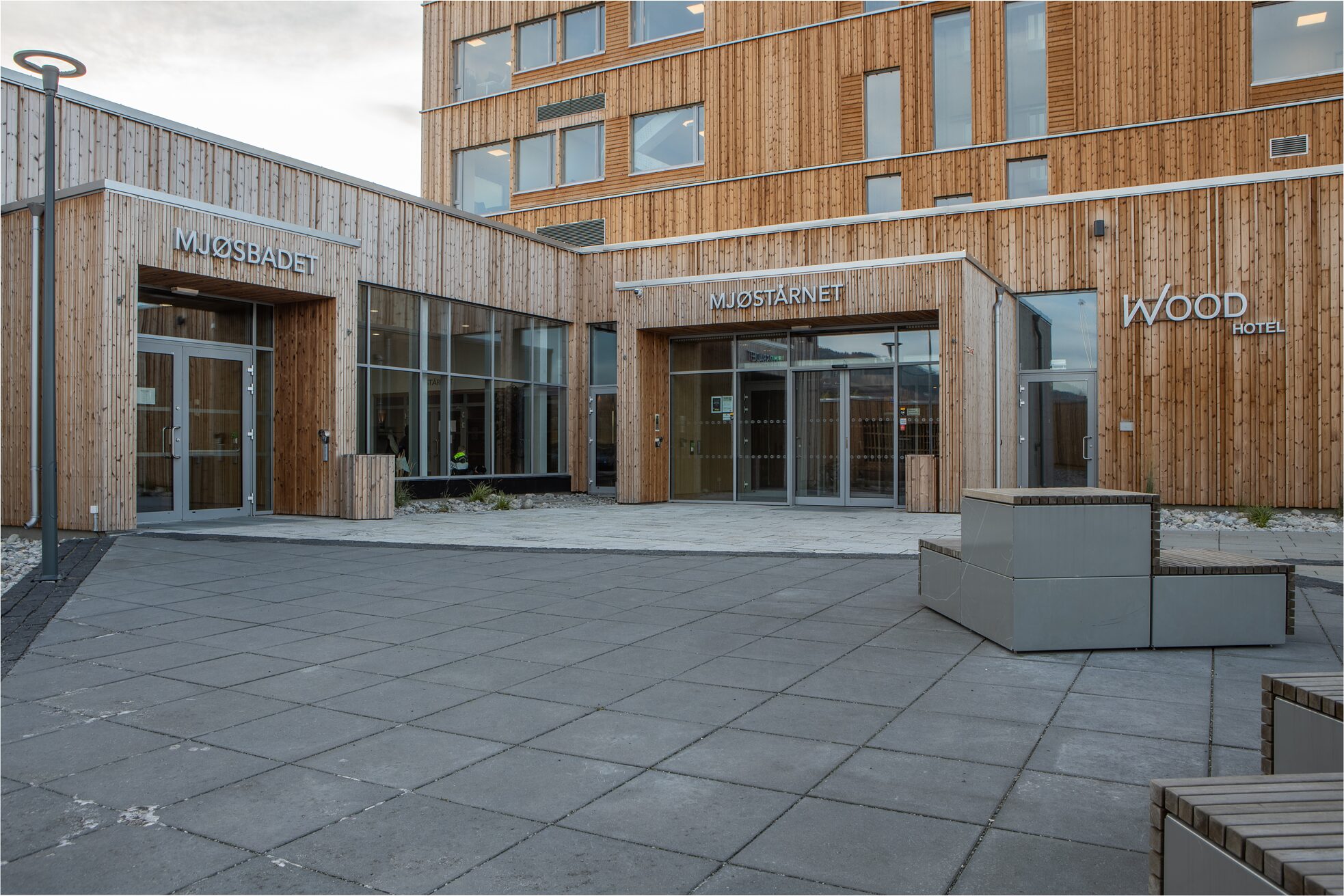 Mjøstårnet is home to the “Woody Hotel”.  | Photo (detail): © Per Oscar Skjellnan

As well as the desire to create a statement piece – something that was also meant to be an inspiration to the property sector in other countries – the use of locally-sourced raw material was of prime importance to the developers. That was the reason for having all the wall panels manufactured by a local firm, the furniture comes from a producer based nearby – and even the slate used in the stairwells is regional.

But the unique nature of this building can be attributed to more than (just) its finishes. In fact, it is more about the use and handling of, what is known as, cross laminated timber, a technique that makes it possible to overcome the limitations of traditional timber construction and to build multi-storey structures in wood, too. With this method architects were able to draw on experiences from a few years ago, when two eight-storey residential blocks were constructed at the Norwegian University of Life Sciences in Ås, near Oslo. On that project they needed a solution that would allow them to provide student residences quickly and cheaply. A task faced all over the world by almost all cities of any size nowadays, and something that is relevant as a general principle for creating affordable housing, as well as, student accommodation. 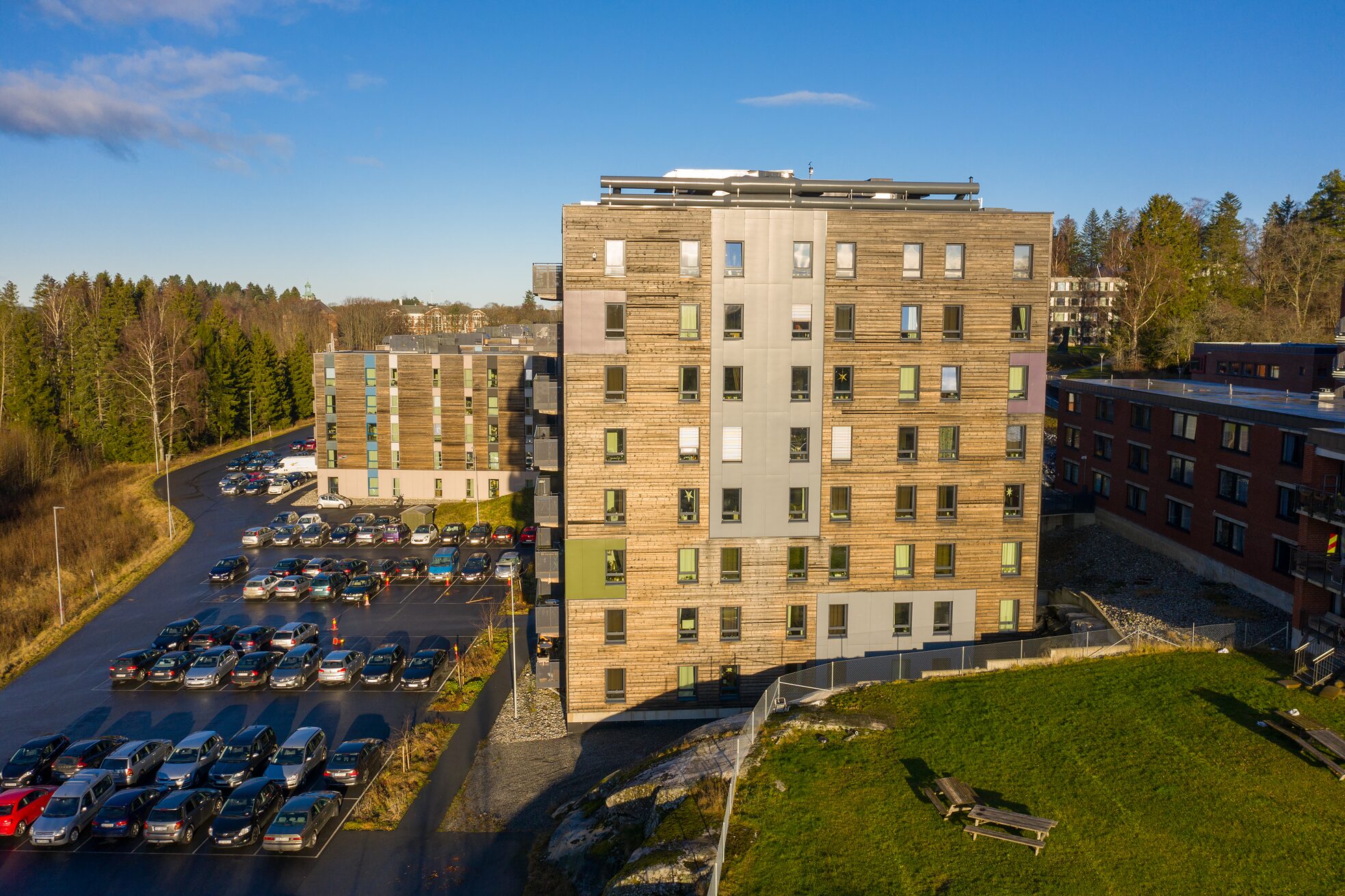 The student residence in Ås seved as a model for the Mjøstårnet. | Photo (detail): © Per Oscar Skjellnan

Tormod Aurlien is Professor of Building Physics, Energy and the Environment at the university in Ås. He is a big fan of the cross laminated timber technique. “Cross laminated timber is when the planks of wood are arranged crosswise in layers and bonded together. This technique allows for the production of large-format, highly durable wooden building elements,” explains Aurlien. “We need to design our cities to be more sustainable, more robust, greener and safer. Building with timber can help us take some important steps in this direction,” he believes and in particular points out the significantly better CO2 balance of wood compared for instance with that of concrete. One study, for example, indicates that a timber revolution in the construction industry could reduce global CO2 emissions by 14 to 32 per cent. 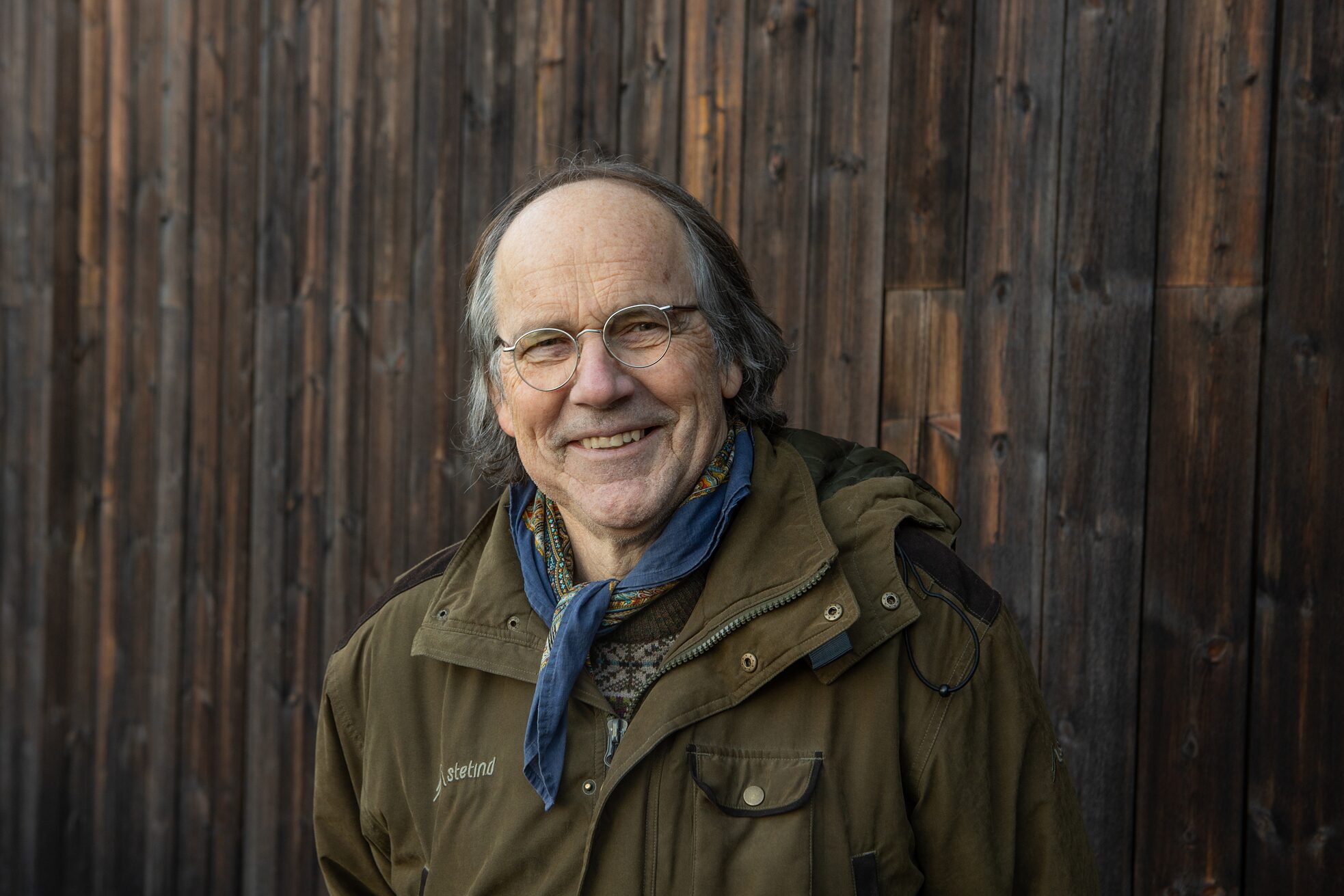 “We need to design our cities more sustainably,” says Prof. Tormod Aurlien from the University of Life Sciences in Ås | Photo (detail): © Per Oscar Skjellnan

“Wood is a renewable raw material, but of course a good climate balance can only be achieved if you use local resources. However, timber is in the process of making a comeback in the building industry, so that, in the case of the Mjøstårnet construction project, it was already possible to use locally produced wood.” Answering the question of whether or not the fire risk in urban areas is significantly higher for timber buildings than for concrete, steel and glass, Aurlien refers to extensive tests with which it could be proven that the new wooden structures have outstanding fire resistance thanks to their high material density. Nevertheless, installation of sprinkler systems is of course a mandatory requirement – just as it is for the construction of any high-rise buildings. And they now have experience with regard to the possibility of water damage. “After water damage occurred shortly before the student block opened, all showers in the bathrooms were fitted with timed flow valves. So we’re learning all the time,” concludes Aurlien. 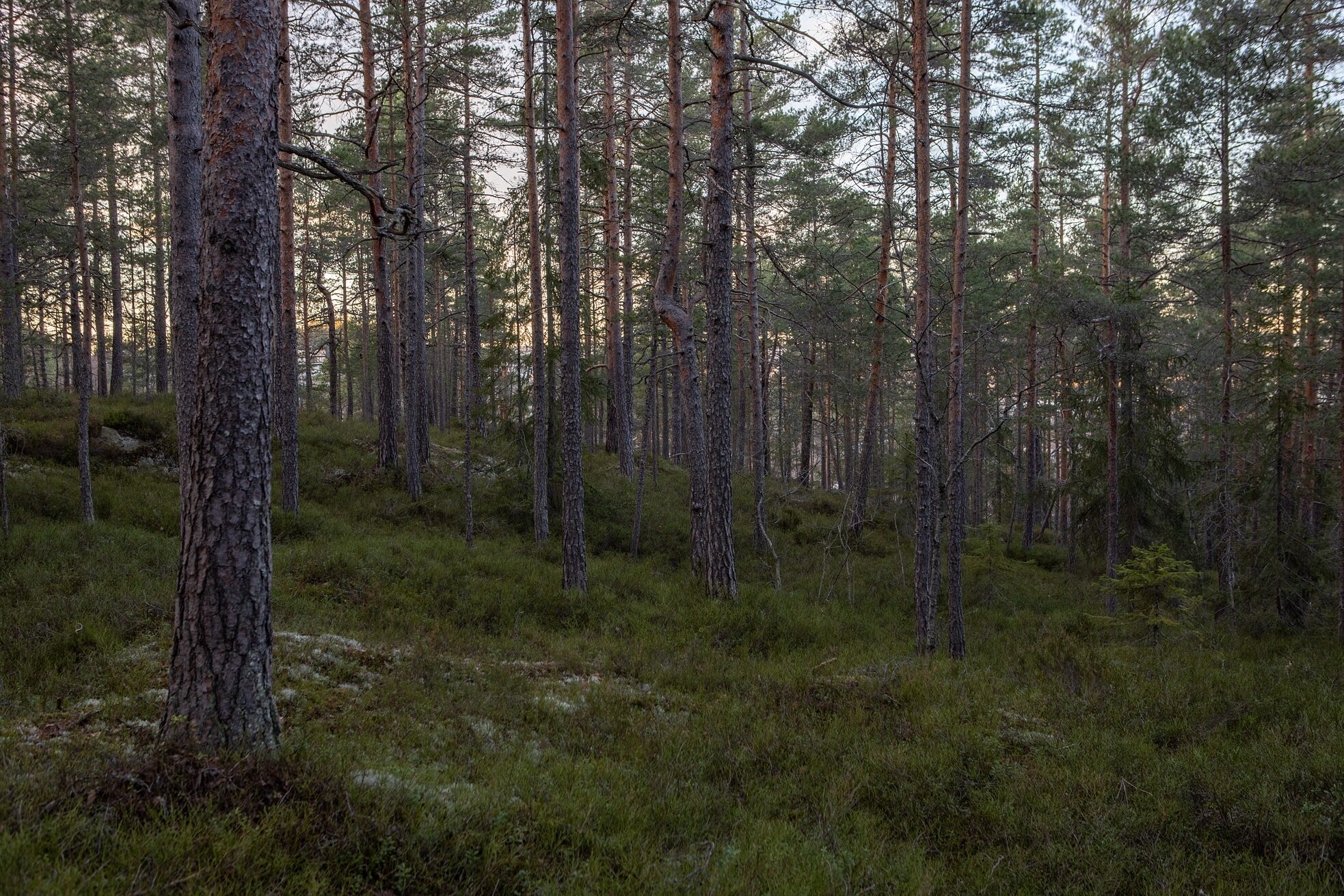 Back in Brumunddal, where you obviously can’t leave without a little detour to the public roof terrace. Below the roof sculpture, nearly five metres high, making it a good metre-and-a-half taller than the HoHo in Vienna – another wooden skyscraper built at the same time – and allowing the Mjøstårnet to take the height record instead, there’s a panoramic view across the countryside. Ultimately, the greatest achievement of the property developers and engineers is that they kick-started the development of a new and sustainable construction method – and by 2041, at the latest, when the W350 Tower in Japan is scheduled for completion, with a planned height of 350 metres, the Norwegian timber skyscraper will have to relinquish its record.

How Can the Urban Boom Become an Ecological Miracle?

All over the world cities are growing almost unchecked. Globally the urban population could almost double by 2050. This will involve traffic chaos, use of energy-intensive building materials like steel and concrete, displacement of ecosystems. Yet cities in fact have the potential to be exceptionally sustainable – because residents there are sharing infrastructure in a small space, which in turn saves resources and energy. In our feature stories on the subject of the urban boom, different authors look at three approaches and ask how urbanisation can be implemented sustainably.

Nicole Schalin is an architect and building biologist living in Norway.